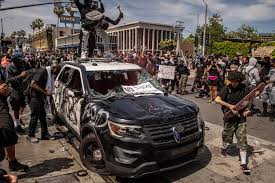 NEW YORK — Police arrested 57 demonstrators during a wild Manhattan election protest, including a woman they say punched an NYPD two-star chief and a woman caught on camera calling a cop a “fascist” and spitting in his face, officials said Thursday.

When the protest ended Wednesday night, 33 men and 23 women were facing a variety of charges and violations, cops said.

Four demonstrators were taken into custody while 21 were given desk appearance tickets. An additional 32 received criminal court summonses.

Several small fires were set as protests in Greenwich Village grew unruly and marchers clashed with cops trying to stop their march through the neighborhood.

During the skirmishes, protesters pelted NYPD Chief of Department Terence Monahan’s SUV with eggs while a two-star chief was punched in the face as he helped arrest a protester.

The woman who allegedly punched the chief, Rachel Mernard, 23, of Brooklyn, was charged with assaulting a police officer.

Devina Singh, 24, of Pennsylvania was also taken into custody for screaming “F— you, fascist!” and spitting into a police officer’s face. The exchange, as well as the moment when the cop tackled her to the ground and arrested her, was caught on video.

Singh was charged with obstructing government administration and given a criminal court summons for spitting, which is a violation of COVID rules.

The evening started peacefully with about 400 protesters from an array of organizations marching in a “Count Every Vote” rally down Fifth Ave. Many protesters waved signs supporting Vice President Joe Biden, who is closing in on the electoral votes that could oust President Trump from the White House.

That group moved peacefully downtown to Washington Square Park, where another batch of protesters had amassed. As the two groups mingled, the “Count Every Vote” protesters dispersed, while the others started marching toward Seventh Ave.

Soon chants of “F— Trump!” “F— Biden!” and “F— the police!” broke out, and many marchers clashed with cops near Leroy St.

“Our group worked desperately to be nonviolent and avoid police confrontation, and we did so,” said Justin Hendrix, one of the organizers of the “Count Every Vote” event. “This other group started where we ended.”