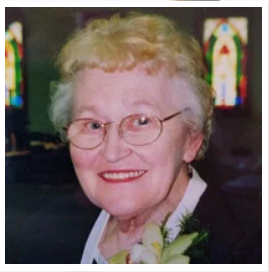 Mildred “Millie” Marie Aho, age 96, of Hessel, Michigan, passed away peacefully on November 11, 2020, at the Evergreen Living Center in St. Ignace, Michigan, where she was a resident for the past 6 years. Millie was born on May 19, 1924 in Detroit, Wayne County, Michigan.

Millie married the love of her life Arthur “Art” Aho on June 19, 1946, and they lived most of their life in Rudyard and on Pine River in Hessel. She retired from the Federal Government in 1977. Millie began her career with the government working for the draft board in Detroit during WWII and later continued working in procurement as a contract administrator at Kincheloe AFB. She was very proud of the work she did and received numerous awards and commendations from the Air Force.

Millie was a lifelong member of St. James Lutheran Church in Rudyard and was active in the women’s guild, and choir. She especially enjoyed baking for the church bazaars and working at the pasty making events. She was also a member of the Rudyard VFW Auxiliary and the Rudyard Historical Society.

Millie enjoyed taking pictures and writing in her diary. Whether it was a family event or church social, you could bet that Millie would have her camera in hand. Her detailed diaries and photo albums have become a family archive of information. She enjoyed spending time at the family hunting camp in Rudyard and was an avid hunter for many years. She loved the home Art built for them in 1976 on Pine River, feeding birds and deer and tending to her flowers. She had many great neighbors at the river who helped with the few things she couldn’t handle herself. A very special thank you to Jackie and Jon Soblaskey for being such wonderful neighbors.

Millie is survived by her two sons, David Aho and Dan (Nancy) Aho; grandson, Stephen (Erika) Aho; and granddaughters, Kassidy and Hannah, whom she adored. Also surviving are her sister, Nancy (Paavo) Nurmi; brother, Willard (Sheila) Mayry; and many cherished nieces and nephews.

Millie will be laid to rest next to Art in Oaklawn Chapel Gardens. A graveside service for immediate family members will be held at Oaklawn on November 13, 2020. The family also plans a celebration of life in the Summer of 2021.

A memorial has been setup in her name at St. James Lutheran Church in Rudyard and Evergreen Living Center in St. Ignace.

The family wishes to thank the staff at Evergreen who have cared for her and to Pastor Matt Lamb for his many visits that meant so much to her.