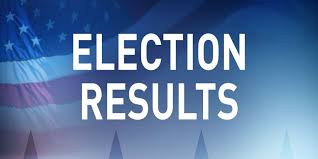 St Ignace News – Results are in for many of the races in the Tuesday, November 3, general election.

Michigan Secretary of State Jocelyn Benson says state election results may not be complete until Friday, November 6, because the of the many mail-in ballots that could not be counted until election day.

Nationally and statewide, the presidential election was not decided by noon Wednesday, but Mackinac County voters gave incumbent President Donald Trump almost a 2-to-1 margin over Democratic challenger Joe Biden. In Mackinac County, voters gave Mr. Trump 62% of the vote with 4,258 to Mr. Biden’s 37% with 2,589 votes. In the 2016 general election, Mr. Trump defeated Democratic nominee Hillary Clinton 3,744 votes to 2,085.

The Michigan senate race between Republican challenger John James and Democratic incumbent Gary Peters was also undecided by noon Wednesday. In Mackinac County, Mr. James was the favorite, pulling in 4,215 votes (61%) to 2,595 votes (38%) for Senator Peters.

Beth Ann Gibson was reelected as the Judge of the 92nd District Court in an uncontested race, collecting 4,509 votes in Mackinac County and 2,265 votes in Luce County.

Mackinac County voters overwhelmingly supported a ballot proposal renewing funding for veteran services, with 5,648 voters in favor and 726 against. With the proposal’s passage, services will receive 0.1 mill from 2021 to 2023. The millage is estimated to raise $108,117.71 in its first year.

In another unopposed race, Republican Tom Doty collected 5,055 votes to be reelected to the Mackinac County Road Commission.

Democrat Kaye Matelski will be the Brevort Township clerk. She and Republican Shyanne Bird tied at 153 votes, but Ms. Bird moved out of the township after the deadline to withdraw from the race and is, therefore, ineligible.

Republican Lisa Fitzgerald was not challenged in her township treasurer bid and received 989 votes.

In Garfield Township, the Fire and Ambulance Major Equipment Millage ballot question passed, with 544 votes for and 103 against. A tax of 0.5 mill will be levied through 2025 and is estimated to raise $43,104.80 in its first year.

Republican Paula Fillman was not challenged for township clerk and collected 561 votes.

The two township trustee seats were won by Republicans Clarence Ketcher, with 524 votes, and Duncan MacArthur, with 527 votes.

The two trustee seats were secured by Democrat Gary Derusha with 59 votes and Republican Karen Kerridge with 90 votes. There were no other candidates.

In Marquette Township, a Fire and Ambulance Services millage proposal passed with 316 voters in favor and 61 against. The proposal is for 1 mill and will run through 2025. It is estimated to raise $34,413.

A Rebuilding and Construction of County Roads millage proposal passed with 292 people in favor and 88 against. The proposal will raise 3 mills for five years and is expected to raise $103,375.

Republicans William Beacom, with 325 votes, and Brody Waybrant, with 310 votes, secured seats on the township board.

Democrat Susan Dionne will be returning as township treasurer after receiving 458 votes in an uncontested bid.

Two Republicans won seats as township trustees, Keith Keller with 225 votes and Ronald O’Neil with 201, to beat Democrat George Termblay, who had 59 votes.

The township’s two trustee seats were secured by Republicans Patrick Abram and Edgar Holbrook with 519 and 510 votes, respectively. There were no other candidates for the seats.

The township’s road millage renewal proposal passed with 341 voters in favor and 132 against. The proposal will levy 2 mills for four years and is expected to raise $84,000 per year.

The two trustee seats were won by Republicans Glenn McKenzie and Allen Mitchell with 328 and 352 votes, respectively. There were no other candidates for the seats.

Leslie Chapman secured an uncontested bid for a seat on the Engadine Consolidated Schools Board of Education, receiving 792 votes. Write-in candidate Daryl Schroeder is in line to take the second available seat, although the 41 unresolved write-in votes haven’t been officially distributed yet.

The Les Cheneaux Community Schools Board of Education will be returning two board members,  Jeffrey Cason had 852 votes and Kimberly Reid had 880 votes.

The two seats up for grabs on the Moran Township school board were taken by Paul Matelski with 380 votes and Nicole Rickley with 403 votes. There were no other candidates for the seats.

Jason St. Onge and Urvana Morse were reelected to seats on the Mackinac Island Public Board of Education with 330 and 347 votes, respectively. There were three spots available on the board and 12 unresolved write-in votes.

Four spots on the Pickford Public School board went to Thomas Portice with 152 votes, April Batho with 145 votes, Rebecca Crimin with 144 votes, and Melanie Greenfield with 134 votes.

The three seats on the Rudyard Area Schools Board of Education were won by Karen Sprague with 16 votes, Douglas Besteman with 15 votes, and Juanita Steikar with 13 votes.

The two St. Ignace Area Schools Board of Education seats were won by Amanda Garlock with 1,281 votes and G. Michael Emery with 1,018 votes.

Four seats on the Tahquamenon Area Schools Board of Education were open, but only only three candidates made bids. Bruce Klusmeyer received 2,549 votes, Amber Taylor had 2,342 votes, and Lawrence Vincent got 1,980. Mackinac County voters gave Mr. Klusmeyer received 316 votes, Ms. Taylor had 280 votes, and Mr. Vincent 253 votes. Voters from various precincts in Mackinac, Chippewa, Luce, and Schoolcraft counties decide the board.

Tahquamenon Area Schools also was granted its school operations millage, 2,775 to 1,594, with 321 in Mackinac County voting in favor and 269 voting against. The proposal is to renew 18 mills on non-homestead properties for the next five years. It is estimated to raise $3,214,007 in the first year. Votes in this race also came from Mackinac, Chippewa, Luce, and Schoolcraft counties.