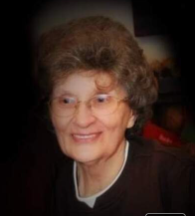 Joanne was born on June 20, 1934, in Sault Ste. Marie, Michigan to the late George and Mabel (Stevens) Nash.  Joanne graduated from Sault High School with the class of 1952.  She continued her education at the Henry Ford School of Nursing.  On March 10, 1955, Joanne married Keith Erickson at Algonquin Methodist Church. She was a member of the Brimley Baptist Church.  Joanne was active for many years in various church ministries including Awana, Sunday school teacher, youth group sponsor, and deaconess.

Joanne was preceded in death by her parents and a sister: Dorothy Smith.At this time no public services will be held.  A memorial service will be held at some point in the future.  In lieu of flowers, memorials may be left to Hospice of the EUP.