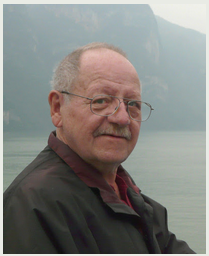 Jack was a Rudyard, Michigan native born in a farmhouse on the Kinross Township side of Ploegstra Road on November 3, 1937, to Harold Lemuel Irwin and Lydia Anna (Altman) Irwin.

He attended Rudyard High School and then spent four years in the Navy after joining in 1956 alongside his cousin Leonard Brood.  After the Navy, he went to work at the Iroquois Hotel on Mackinac Island where he met his beautiful future wife Barbara Jane Bauermeister, daughter of Norman and Betty (Snyder) Bauermeister of Minerva Park, Ohio.  They were married August 29, 1964, at a church on the campus of Ohio State University where Barbara graduated two days before.  Jack went on to get his degree in Computer Data Processing from Ferris State University.  He and Barbara purchased and renovated an old farmhouse in Blacklick, Ohio while Jack worked as a systems analyst in the publishing department of Xerox and Barbara raised two daughters.  In 1978 Jack decided to leave Xerox and move his family home to the Upper Peninsula of Michigan.  Rumor has it he tossed all his ties over the Mackinac Bridge along the way.  He purchased Ada’s Bar in Kinross and changed the name to the Jack Pine Bar, which he owned until 1992.  He made a multitude of friends during his days as “Jack Pine Jack” and loved running into them over the years and reminiscing with a cold one.  Jack traveled the world with the Navy and again with family in his retirement taking Viking River Cruises to China, Russia, and Europe.

Jack was very generous and would give anyone the shirt off his back if they needed it.  He lent his beautiful camp Jägermeister to friends and loved ones when he wasn’t able to enjoy it, and it made him happy to hear stories of the good times they had there.  He whistled while he cooked, and always had a crossword puzzle in the works.

Thanks to those who always stopped by to check on him and brought him meals. Jack did not want to have a funeral home service.  He would have loved an Irish wake like the one held for his father Harold at the Log Jam Bar while Harold was still alive and able to celebrate with them.  We were not fortunate enough to do the same for Jack, but he did have a very special surprise 80th birthday party not long ago.  There will be a graveside service for Jack and Barb next summer at North Rudyard Cemetery.  Please raise a glass to them.