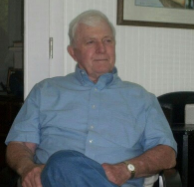 Gordie was born on May 26, 1931, in Fort William, Ontario, Canada, to the late Robert and Christina (Mercer) Gilray.  His family immigrated to the United States in 1938, residing in Sault Ste. Marie MI.  Gordie served his country with the Michigan Army National Guard, 1437th Engineer Company during the Korean Conflict, attaining the rank of Sergeant.  While in the Army, he played hockey for the Fort Lewis Warriors.  In 1956, Gordie moved his family to Mt. Pleasant, MI, and opened A & G Floor Covering in 1959, a business his sons took over when he retired and his love of the UP brought him back home to the Soo.  Retirement didn’t last long and Gordie soon pursued new business ventures, including real estate development, bar owner (The Horny Toad), and owner of JMC Self Storage.

Gordie served as president of the Civitan Club of Mt. Pleasant and was a member of the VFW Post #3676, the Elks Club #552, and the American Legion Post #3. He enjoyed boating, snowmobiling, and 4-wheeling, especially leading groups on the beautiful trails across the UP.  He loved to spend time socializing, watching sports, and listening to music – Elvis, Johnny Cash, and Frank Sinatra being a few of his favorites.   And he loved his family, who love him and will miss his kindness, his stories, his laugh, and his beautiful blue eyes and white hair.  In 2014, Gordie’s health was suddenly taken from him, but he was a fighter and beat the odds over and over until it was the right time for him to leave this earth.  He is our hero, our superman, and we are grateful for the time we had to grow even closer as a family.

Gordie’s family wishes to express their heartfelt appreciation to Serenity Home Care, especially Char, Dana, Linda, and Rachel, for their attentive and loving care.  To honor Gordie, the family encourages donations to be sent to the Hospice House of the Eastern Upper Peninsula, VFW, American Legion, or Elks Club.

A graveside service and celebration of Gordie’s life will be held at a future date.