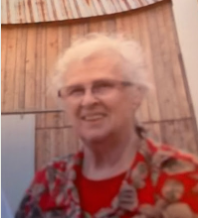 Arbutus A. Whitworth, 82, of Brimley, passed away on Saturday, November 14, 2020, at the Hospice of the EUP – Hospice House in Sault Ste. Marie.

Arbutus was born on January 2, 1938, in Wawa, Ontario, Canada. As a young high schooler, Arbutus worked at Bay Cliff Health Camp and learned that she wanted a career helping disadvantaged people. She attended Michigan College of Mining and Technology (LSSU), University of Michigan, and attended the Mayo Clinic graduate program to complete her studies.

Following graduation, she went to work at War Memorial Hospital heading up the Physical Therapy Department, followed by years of work for the Chippewa County Health Department.  In retirement, she helped the Salvation Army food pantry and in other areas.

Arbutus loved music (especially band) and played in the Salvation band, and Soo High Band and Orchestra. She ensured her boy’s ability to compete in hockey and baseball and was very vocal in doing so.  She loved flower gardening, ceramics, and crafting, the Redwings, baseball, and especially hockey.  Arbutus was very compassionate in helping anybody and everybody.

Arbutus was preceded in death by her parents and her husband: John Whitworth.