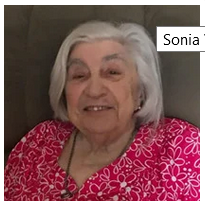 Sonia grew up in Detroit and later moved to Farmington Hills, Michigan. She graduated high school in the Detroit area where she met and fell in love with George Krikor Vartanian. The high school sweethearts married July 20, 1946 in Detroit after George returned from his service during World War II. Together they raised three children. Sonia kept the house running for most of her life, although she did work in the retail industry for a few years while George worked as a craftsman making furniture. In 1977, they moved to Petoskey, Michigan, where George worked at Northern Michigan Hospital, where he later retired.

Sonia was a member of the AYF (Armenian Youth Federation).

Sonia loved cooking and baking. Some of her favorite foods to make were cheese bereg, baklava, and shish kabobs. She also loved spending time with her children and grandchildren. She was the most giving person and never complained a day in her life.

Interment will be held at Greenwood Cemetery in Petoskey, Michigan.

Memorial contribution may be made to the American Cancer Society

Dodson Funeral Cremation Burial Services in St. Ignace, Michigan is serving the family. Condolences may be sent to the family at www.rgalerfuneralhome.com.