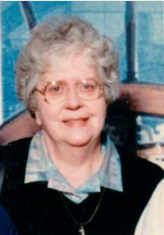 Norajean Wilcox went to be with her Lord and Savior on October 4, 2020. She was predeceased by her parents David and Katharyne (Malone) Sutton; and her husband of 46 years, Francis Arthur (Art) Wilcox.

Norajean was born in the Sault on August 25, 1930 and graduated from Brimley High School in 1948 as valedictorian and attended a few classes at Lake Superior State University. Norajean began her career at the Sault Evening News. She then worked as a secretary for the Sault Area Public Schools becoming secretary to the superintendent. She finished her career as secretary to the Kinross Correctional Facility Principal retiring in 1992.

Art and Norajean owned and operated Wilcox Grocery Store 15 miles south of the Sault for many years. They enjoyed their time at the store with many friends and neighbors. Art passed away in 1994. Norajean lived in the Avery Square apartments from 1997 to 2015 at which time she moved to Arbor Woods assisted living in Jackson, MI.

Norajean was an elder and member of the Donaldson Presbyterian Church since the 1960’s.

A graveside service for immediate family and a future memorial service are being planned.