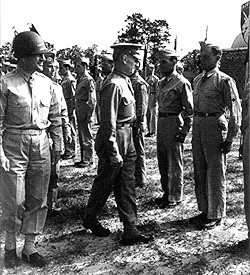 Well here it is Sunday afternoon, and with some time on my hands, I’ve decided to write you folks, some letters. Yesterday, we were inspected by the General. Our Company was rated superior, and that was the highest in the whole 5th regiment. The General said we were the finest group of men that he had inspected. I was one of a group of men that he inspected. I was also one of a group of men that was picked to answer questions and demonstrate how to do certain things that we were taught. I did good in everything, and when I was cutting barbed wire, the Lieutenant said that I was a good man. Then when we had to give hand and arm signals, I was the only one who knew them all, and Sargent Keysor, who was in charge, said that I had done the best of all the men who were at that station.

Well, tomorrow starts the thirteenth week of my training. Boy, time is sure flying by. I have a copy of the schedule for the twelfth week that I will send so that you will know what I have been doing. In addition to what the schedule says, we had guard duty Wednesday night and a night class.

Did I tell you folks that I went to a wedding? Our platoon Sargent got married to a girl from Washington. The wedding was last Monday night.

It is kind of quiet around the Company area today. Most of the fellows have passes that are good until 6 o’clock, Monday morning. I could have got one too, but there was so much stuff that I had to have before the General’s inspection that I don’t have enough money to go to town. Oh well, tomorrow is payday again.

I had a letter from the farm the other day. Uncle Archie writes to me quite often. We had a pretty good dinner today. We had fried chicken, mashed potatoes, cauliflower, tomatoes, head lettuce, chocolate milk, apple butter, peanut butter, and ice cream. We could have all we wanted because most of the fellows were in town. I had two helpings of chicken, potatoes, and tomatoes, and three big cups of chocolate milk. Boy, was I full.

Tell Caroline and Effie hello. Caroline has been wanting me to write to her, and if I get a chance, I will write a letter to her today. It is too bad about the Michigan Northern safety record being broken.

It certainly is nice down here. The sun is shining brightly and everything is so green. I don’t know much news, but I certainly appreciate the letters that you folks write to me. I’ll write when I can.