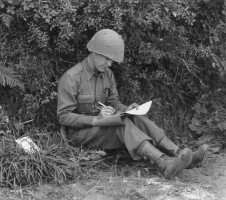 Dear Ma and Pa,
Well, here I am again. I just finished cleaning my rifle and taking a hot shower. Boy, was it tiresome working the targets this morning and afternoon, with just enough time off to take my shots at the 500-yard line. In my practice shots, I got a total of 35 points out of a possible 40 points.  But on my record shots, I only got 30 points out of 40, because the wind changed, and my bullets went just a little off the bullseye. Boy, was I mad but better luck next time.

You know that wise guy I was telling you about? Well, last night he started bullying some of the  fellows around, and he threatened to catch one of the fellows off the post and beat him up. Well, this morning he was still in the same frame of mind, and when he started some of his sarcasm this morning, I knew some of it was directed at me, so I told him off like he had never been told off before. I didn’t go cursing him around. I just told him what the set-up was, just how much I was going to stand from him, and I asked him where he got all of his so-called authority? Told him who was elected hut Commander and who we would take orders from and to mind his own business. He was kind of sore at first, but I didn’t care. So when we went to breakfast, some of the fellows were discussing the situation, and they thought that I did right, and so did the hut Commander. Some of the fellows are scared to tell him off. He finally took it to heart, and after chow, he saw me outside and came over to apologize for the way he acted. He has been as meek as a lamb all day so far, so I haven’t been concerned. I never believed that the change could be possible.

Well, I got a nice letter from Uncle Archie tonight. I think I will answer it now while I have the chance. I got four letters from you yesterday. I didn’t get the shirt yet but it will be along. That was a nice box that you sent me. I take the cookies along with me when I go on the range because they sure hit the spot after dinner time. I eat them whenever I get the chance. A lot of the other fellows have got boxes themselves, so I save my cookies for me and my buddy.

I am going to send you part of my pay, $15.00. You sent me a total of $15.00 in money orders not counting the $2.00 I received from Myrt and Effie. You can either use it yourselves, save it for my furlough if I get one, or save it in case I run short before my next
payday.

Between your letters and the Evening News, I am pretty well informed. Keep on writing when you can.  I will do the same.

P.S. If Dad should go down to the Armory to get my service ribbon, please don’t send it to me in a letter. Because they have some machine here that cancels letters that will break if there is anything other than paper in it. You can probably get a small box or something to send it in. Thanks a lot.