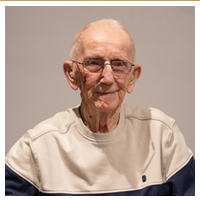 Ernie was born on February 23, 1920, in Hillman, MI to the late Tadge and Francis (Brown) Messer. He graduated from Brimley High School with the class of 1939. Ernie served his country as a staff sergeant in the United States Army during World War II. On September 22, 1947, he married Ruth A. Douglas in Sault Ste. Marie, MI. Ernie worked many years in banking and retired from the First National Bank.

Ernie was actively involved in the Sault Wesleyan Church and earned board member emeritus status. His favorite pastimes included picking blueberries, playing the guitar and spending time with his family. Ernie enjoyed playing sports, including baseball, basketball and horseshoes. He continued to cross country ski well into his 80’s. Ernie had a special party earlier in the year to celebrate his 100th birthday.

Ernie was preceded in death by his wife of 71 years, Ruth Messer; his brothers, Ralph, Carl and Herbert Messer; his sisters, Gladys Burnham, Esther Laplander and Betty Messer; and his grandson, Chuck McPherson.

A funeral service will be held at 11:00 AM on Tuesday, October 27, 2020, at C.S. Mulder Funeral Home with Pastor Brooks Sayer officiating. Friends may call at the funeral home from 10:00 AM until the time of the service. Burial will be at Hillcrest Cemetery.