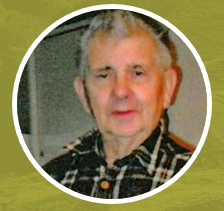 Crandel was born on April 9, 1926, in Moran, Michigan to the late Rudolph and Matha (Newman) Wiertalla.  He attended St. Ignace High School.  Crandel served in the United States Army during World War II as a Water Supply Technician in Okinawa and was given an honorable discharge.  He received the Asiatic Pacific Theater Ribbon, the Victory Medal, and a good conduct medal.

Crandel married Doris Bosley of Stalwart, MI on June 22, 1949.  He worked for the Soo Line Railroad and retired after 35 years of service.  Crandel was a member of the Faith Lutheran Church and had strong faith and beliefs.  He was always ready to be of help to others in need.  He was also a member of the Brimley VFW.

Crandel enjoyed tinkering with everything. He was always busy, making things for himself and going to the casino. He loved learning about history.

Crandel is survived by his son: Lance (Debra) Wiertalla of Essexville, MI; five grandchildren: Dana Wiertalla of Las Vegas, NV, Brent Lee (Crystal) Wiertalla of Warren, MI, Lacey Lin Wiertalla of Spokane, WA, Theresa (Ryan) Kuskowski of Warren, MI, and Cristy (Josh) Mullin of North Carolina: and great-grandchildren: Madilyn Lee Wiertalla, Zach Kuskowski, Easton and Colt Wiertalla, and Abigail, Addison, and Aubrey Mullin.  Crandel is also survived by his sister: Gloria McKinney of Brimley, MI; a sister-in-law: Alice Wiertalla of Dearborn, MI; and many nieces and nephews (with one who was special to him for always being there for him when needed, Randy McKinney).

Crandel was preceded in death by his parents, his wife: Doris; his daughter: Llori; three brothers: Kenneth, Roland, and Rudy Wiertalla.

A funeral service will be held at 12:00 noon on Friday, October 2, 2020, at C.S. Mulder Funeral Home. Visitation will be held prior to the service from 11:00 AM until the time of the service.  Following the funeral, burial will be at Oaklawn Chapel Gardens with military honors.