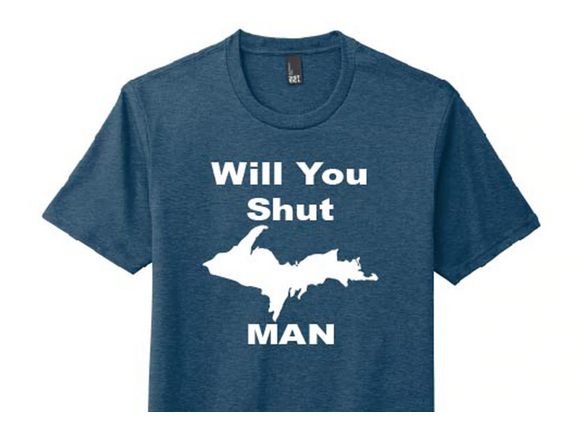 BOYNE, MI – In one of the most memorable one-liners of the first presidential debate, former Vice President Joe Biden asked an interrupting President Donald Trump to be quiet.

“Will you shut up, man” can now be found on apparel from several sources, including Biden’s campaign and a Northern Michigan company that injected a map of the Upper Peninsula in place of the word “up.”https://a727ed9dc50f516a221162654076c957.safeframe.googlesyndication.com/safeframe/1-0-37/html/container.html

“I received so many messages yesterday on this,” said Ivette Lopez, owner of Boyne-based Outdoor Beerdsman.

Customers asked, and she delivered. The blue unisex T-shirt is now available online for $22-$25.

The company also has T-shirts in support of Trump. One says “Michiganders for Trump 2020 silent majority no more” and replaces the “U” in Trump with a map of Michigan. Another features a tractor in front of mountains and reads “Trump’s snowflake removal service 2020.”https://tpc.googlesyndication.com/safeframe/1-0-37/html/container.html

Biden uttered “Will you shut up, man” during one of the several times Trump interrupted him over the course of the Sept. 29 debate in Cleveland moderated by Chris Wallace of Fox News. The remark came early in the evening during the first segment on the Supreme Court.

Wallace had asked Biden if he intends to add seats to the Supreme Court and “pack” it with his own picks if he’s elected president. Trump repeatedly interrupted Biden during his allotted time to urge him to reveal if he plans to “pack the court.”

“Will you shut up, man?” Biden said. “This is … this is so unpresidential.”

The debate was packed with interruptions that came mostly from the president, making it difficult for Wallace to keep the debate on topic and running on time.