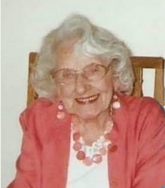 Rita was born on June 18, 1924, in Sault Ste. Marie, Michigan the daughter of the late Anthony and Florentine (Piche) VanDusen.  She graduated from Sault High School with the class of 1942.  On May 8, 1944, she married Warren Spencer in Detroit, Michigan.  Years ago, Rita worked in admitting at War Memorial Hospital.  Later, she worked at WSOO where she was a radio personality on the show “Talk of the Town” and wrote copy for much of the area advertising.  Her last job was with Soo Locks Boat Tours where she helped run the front office.  Rita was very artistic.  She enjoyed drawing and painting.  She enjoyed shopping and loved to decorate.  Rita was very well known for her parties, especially her annual Christmas party.

Rita is survived by her daughter: Gail (Clifton) Blose of Manistique, MI; many grandchildren, and still more great-grandchildren.

A funeral service will be held at 1:00 PM on Monday, September 14, 2020, at C.S. Mulder Funeral Home.  Friends may call at the funeral home from 12:00 noon until the time of the service.  Burial will be at Oaklawn Chapel Gardens.