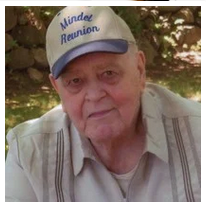 Bill was born on December 14, 1934, in Petoskey, MI, the son of Frank and Ruby Mindel. He went on to meet and marry Edna Lorraine Kaufman in 1951. The couple moved to Wayne, MI where they raised their four children.

After moving to Wayne, Bill worked for General Motors Hydramatic Division. He was active in the union and ran for union vice-president. He later worked for the Kelsey Hayes Plant until his retirement in 1996. After the death of his wife, he moved to Goetzville. He loved to hunt and fish and was an avid historian.

He was preceded in death by his parents, his wife, and his don Dale H. Mindel.

A graveside service will be held in October at the Bliss Township Cemetery in Levering, MI with a memorial dinner to follow.