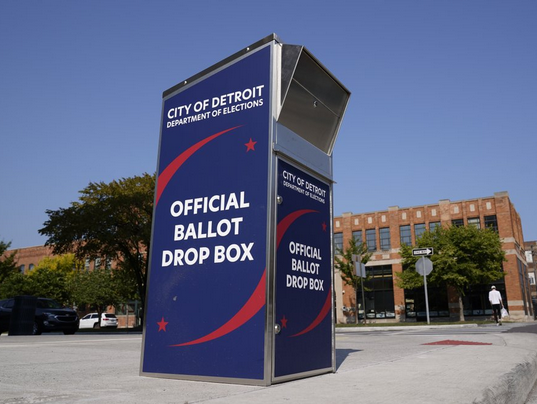 LANSING, Mich (AP) — Early voting for the 2020 general election started in Michigan on Thursday under expanded voting rights that allow for any resident to request an absentee ballot.

Amid concerns about the coronavirus pandemic, nearly 2.4 million residents already had requested absentee ballots, more than ever before, the state reported Tuesday. With 40 days until the Nov. 3 election, people are encouraged to turn in their ballots early to avoid any mail delays.

People can also vote early in person and on Election Day. Lansing City Clerk Chris Swope said about 30 people came to one of the city’s locations to vote on the first day of early voting. His office, like many others in the state, is hopeful that people return ballots as early as possible.

Concerns and confusion about how to safely vote amid the pandemic, coupled with changes to absentee voting rules in Michigan, make it important for voters to have good information.

Michigan is among the battleground states for the presidential election after the state voted for President Donald Trump over Hillary Clinton in 2016 by a less than 1% margin. Both Trump and Democratic presidential nominee Joe Biden have dedicated significant campaign efforts to the state, visiting frequently.

Democrats took the majority in the U.S. House in 2018 in small part due to historically Republican seats being flipped in southeast Michigan. Meanwhile, Democratic Sen. Gary Peters is fighting for reelection after his first term in a tight race against Republican John James, who lost to Democratic Sen. Debbie Stabenow in 2018.

On a state level, Michigan’s Supreme Court is seeing Republicans battle to maintain a 4-3 majority as two seats are up for election.

Michigan residents will vote on two ballot initiatives, one to allow the state to continue to receive funds from sales of oil and gas from state-owned lands to support state parks and another to extend the prohibition of unreasonable searches to a person’s electronic data and communications.

Michigan residents can register to vote by mail, online, or in person. Since voters approved an expansion of Michigan’s voting rights in 2018, residents can register to vote in-person at their local clerk’s office the day of the election. Those registering to vote another way must have their voter registration application sent or postmarked by Oct. 19.

Under the expansion of the state’s voting rights, people do not need a reason to vote absentee and can send their ballot through the mail or bring it to their local clerk’s office.

Under a new court order, absentee ballots can be mailed in as late as Nov. 2 as long as they arrive within 14 days after the election.

To ensure a ballot will arrive in time to be counted, voters can use drop boxes that have been placed across the state or take their ballot directly to their local clerk’s office.

Michigan residents can even apply for an absentee ballot in-person at a clerk’s office as late as 4 p.m. the day before the election and submit it that same day.

Polling locations will still be taking in-person voters and every jurisdiction is receiving the necessary cleaning supplies and personal protection equipment they need to perform a safe election, the state says, paid for with federal COVID-19 relief funds.

Clerks across the state have reported changing polling locations to schools or other large buildings with wide hallways to make lines as safe and distanced as possible.