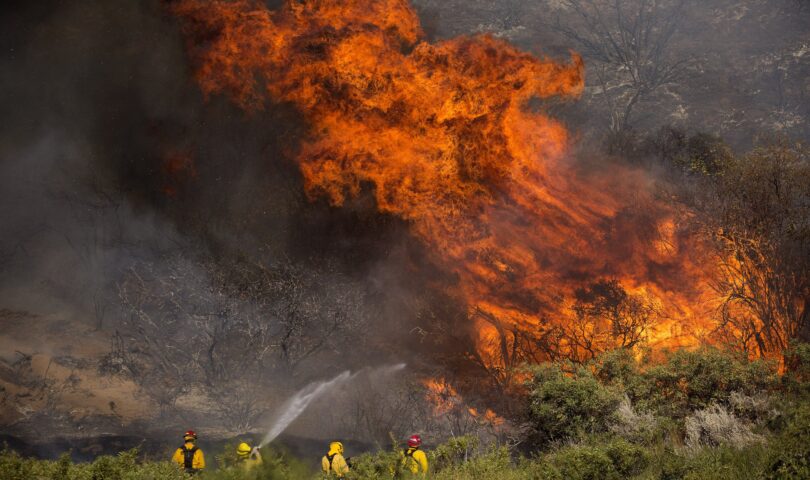 The breakneck Zogg Fire burned through 7,000 acres in less than five hours near Redding in Northern California, and the Glass Fire tore through 2,500 acres in Napa Valley wine country, north of San Francisco, according to Cal Fire.

The fires, driven by gusty winds, burned several structures overnight, including the Chateau Boswell winery and the Glass Mountain Inn, according to the Sacramento Bee. The area house more than five dozen wineries.

“There have been numerous evacuations, that’s been going on through the night,” Cal Fire spokesman Tyree Zander said. “They have a rapid rate of spread, a dangerous rate of spread.”

The National Weather Service issued a red flag warning for nearly all of Northern California. A heat wave in the West is combining with dry winds whipping the area, heightening the risk of wildfires this week.

About 4,500 residents of the Oakmont Village senior living community fled the fast-moving fires – many in nightclothes and robes and gripping canes and walkers as ash spewed in the sky – in Sonoma, the San Francisco Chronicle reported.

“It was scary and I didn’t expect it to be so close,” Doris Tietze, 91, an Oakmont resident, told the Chronicle.

The fire season in California has taken a toll. Since the beginning of the year, there have been more than 8,100 wildfires that have burned more than 3.7 million acres throughout the state, according to Cal Fire. And since Aug, 15 – when California’s fire activity elevated – 26 people have died and more than 7,000 structures have been destroyed.

Northern California is also the location of the enormous August Complex Fire, which continues to burn about 130 miles north of San Francisco. The largest wildfire in state history has charred more than 873,000 acres and was a major contributor to the dangerous air quality state residents were exposed to for days about three weeks ago and the apocalyptic skies over the Bay Area on Sept. 9.

Power will be shut off for 65,000 Northern California electric customers in 16 counties to prevent the spread of wildfires that have engulfed areas of the state, officials said Sunday. The shutoff was enacted as result of a red flag warning because of high winds, they said.

The wildfires have made air quality an issue in recent weeks. Neither the August Complex nor the Creek Fire, which has incinerated more than 302,000 acres of a forest 60 miles northeast of Fresno, is yet 50% contained. So they continue to spew smoke and foul up the air in their surroundings and, depending on the wind, even hundreds of miles away.

People with respiratory ailments are especially susceptible to that harmful air, said John Watson, a research professor of air quality science at the Desert Research Institute in Reno, Nevada.