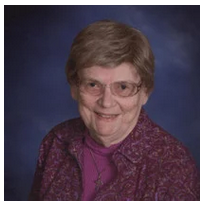 Theresa Marie (Vigneaux) McDowell, age 91, went to be with the Lord on August 20, 2020, at the Evergreen Living Center in St. Ignace, Michigan. She was born in Rudyard, Michigan on April 25, 1929, to Edmond (aka Edward) Joseph and Alice Marie (Tremblay) Vigneaux.

Theresa grew up in Rudyard and she had fond memories of her childhood which revolved around family, friends, and church. She graduated from Rudyard High School in 1947 and worked as a telephone operator for Michigan Bell in St. Ignace for a few years before marrying Glen McDowell in 1951. They had a large family of 10 children. Even with all the work of raising a family of this size, she helped Glen as much as she could with his various projects.

Theresa was a lifelong member of St. Joseph Catholic Church in Rudyard and served as the president, vice- president, treasurer, and secretary of the women’s group – serving in some positions multiple times. In 1994, she was honored as the St. Joseph’s woman of the year. She helped with the Religious Education for many years as a teacher and coordinator of the program. She also belonged to an interfaith Bible Study.

Theresa worked on the Rudyard Centennial Committee in 1983. She also helped Glen with his duties as a UP Fair Board member for many years which involved a great deal of travel. Theresa was part of the Friendship Club assisting mentally disabled children as well as a member of the Rudyard Friends of the Library.

Every summer for most of her life, Theresa cooked huge meals for the hay crew that worked on the farm. She was famous for those big turkey dinners among many other favorite meals.

Theresa’s primary joy in life was her family. She was a devoted wife, and a loving, caring, and understanding mother. She was interested in everything in her children’s lives and loved to hear about what was going on. She lived her life to serve others, mainly her family, and we are all grateful for everything she did for us and our families.

Theresa loved to read, sew, and to paint in her spare time. She has sewn many quilts and painted many pictures for her family through the years.

Theresa was preceded in death by her husband, Glen; sister, Loretta Litzner; and brothers, Paul and Louis Vigneaux.

There will be a private family Funeral Mass at St. Joseph Catholic Church in Rudyard. Father Timothy Hruska will be presiding. Burial will be at the Oaklawn Chapel Gardens.