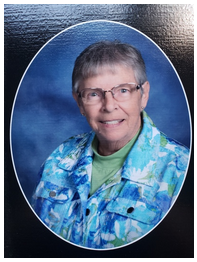 Susan was born on September 24, 1937 in Sault Ste. Marie, Michigan to the late Earl and Reeta (VanDusen) Freeborn.  She graduated from Sault High School with the class of 1955.  She continued her education at Northern Michigan College becoming a practical nurse.  She married James Victor Trombley on June 30, 1956 in Marquette; MI.

As her children were growing up, she actively supported their many actives. She was also known as mom to many of their friends, for herself she enjoyed skating and in the early 1970’s coached the LSSC Hockey “Lakerettes”. She and her family enjoyed many pleasurable hours on the Lake Superior shoreline, from the time her children were small until the last trip in April of this year.

Vic and Sue worked several years owning operating the Dog & Suds Drive-in restaurant before moving to the metro Detroit area where Susan applied her previous success in retail sales at the Hub Clothing Store, The Hudson’s Dept. Store, then at Jacobson’s Dept. Store from which she retired.  Soon after her retirement she and Vic returned to the Sault, living a full life and escaping the snows of Northern Michigan to Florida for several seasons before his passing in 2010.

She spent her last 6 years living at the West Pier Place Apts. making new friends and watching ships pass. She enjoyed puzzling, sharing her love of mahjong, and enjoyed many evenings with her Elks Lodge #552 family where she was a member. Susan was also a member of the First United Presbyterian Church

Her family appreciates the kindness and caring shown by the many people that touched her life, including the West Pier Place Apt staff and tenets, along with doctors, nurses and the hospice house of EUP staff.