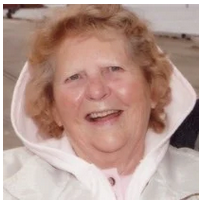 Shirley grew up in Detroit until moving to the Dollar Settlement in the Upper Peninsula in 1944, where she loved fishing with her dad. Shirley married Edgar Wilson and together they had four children. They divorced. Later she owned and operated Mitchell’s Market in Bay Mills for ten years. On September 4, 1982, Shirley married Wouter “Woody” Bandstra and together they traveled throughout northern Ontario as Woody worked construction jobs.

Shirley was a member of the Christian Reformed Church in Rudyard.

Shirley loved snowmobile racing and was the “General” of their snowmobile racing team “Team Freedom #7”. They participated in MIRA, ICE, and I-500 races. She enjoyed traveling and traveled with Woody all over Western Europe, Australia, New Zealand, the United States, and Canada. The traveled annually to visit Woody’s family in The Netherlands. She also loved traveling on Cruise Ships. They sailed around Hawaii, and throughout the Caribbean.

Visitation will be held on Friday, August 28, from 12-1pm at the Christian Reformed Church in Rudyard, MI. The Funeral Service will begin at 1pm.

Burial will be in Hillcrest Cemetery in Superior Township, MI.