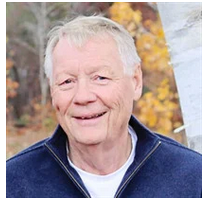 Rick grew up in the village of Rudyard, Michigan. When he was 14 while working as a Detroit Free Press carrier, Rick won a trip to Washington DC because of his outstanding service. Rick spent many summers working for his uncle Gerald Ehle at the Shell gas station in Rudyard. He also worked many summers on his Grandfather, Fred Dowd’s farm (from whom he got the nickname “Dowd”), in Fibre, Michigan. Rick graduated with the Rudyard High School class of 1970. In 1972 he was drafted into the United States Army and proudly served from 1972 until 1974 in Germany. He served an additional six years in the reserves. Rick worked at Rudyard Area Schools as a custodian while attending Lake Superior State College to accomplish the dream of completing a college degree. Rick graduated from LSSC with a BS in Accounting. After graduating from LSSC Rick worked as an accountant for Marvin Henderson CPA, in Kincheloe, from 1979-1988. In 1988, Rick took a position as Senior Accountant Controller with Kewadin Casino’s and eventually retired as Chief Financial Officer in 2019. In his supervisory role and in personal relationships, Rick, through his innate gift of understanding and compassion strived to help people achieve their potential and to be their confidant and friend.

On October 6, 1979 he married Christine A. Meehan at St. Joseph Catholic Church in Rudyard. Together they shared 40 wonderful years of marriage, raising two children, Michael B. (Sarah) McDowell and Melissa L. (Marc) Fountain. He treasured his time with his children and grandchildren, supporting, and loving them in every way possible. He was an exemplary father and PaPa and his children and grandchildren loved him unequivocally. Rick and Christine have a committed and caring relationship. It is based on mutual support and a deep love for each other. Together their life was committed to trust and faith in God and God’s plan, Jesus I Trust in You. Rick is a loving son, husband, father, and grandfather. He is loved by all who have the pleasure of knowing him.

Rick is an active member of St. Joseph Catholic Church in Rudyard where he served on the Parish Finance Committee and as an Extraordinary Minister of the Eucharist. He also served on the Rudyard School Board for 4 years. Rick is a person of faith and lived life serving others.

Survivors include his wife, Christine A. McDowell; mother, Doris R. McDowell of Rudyard; children, Michael B. (Sarah) McDowell and his children, Jarett and Keith of Kinross and Melissa L. (Marc) Fountain and her children Elijah and Ian of Cottage Park; and siblings, Debbie (Rick) Mullins of Ferndale, Randy McDowell of Rudyard and Kori (Jim) Eby of Rudyard. He is also survived by brothers-in-law Pat, Dan, Steve (Mary Jo) and Tom (Patty) Meehan; sisters-in-law, Kathleen (Dave) Windmueller and Barb (John) Linck; and multiple nieces and nephews, as well as numerous extended family members and friends.

Rick was preceded in death by his father, Leonard McDowell in 1993; grandparents, Fred and Gertrude Dowd and Elmer and Edith McDowell; father and mother-in-law, John B. and Charlene Meehan; sisters-in-law, Suesan Casino-Meehan, Shirley (Williams) Meehan, and Barbara Meehan; and brother-in-law Michael A. Meehan.

Christian burial will follow the Mass at Lakeview Cemetery in Kinross, Michigan, after which a luncheon will be held at the Rudyard Pavillion, Rudyard.

There are people who walk among us that in their gentle and caring manor leave us after each encounter with a better feeling about ourselves and the world in which we live. People who offer a kind word and a warm heart whenever they are needed. People who go out of their way to provide others with comfort and a steady calm. Rick is this person for all who know him and he will be dearly missed by everyone who’s heart he touched.