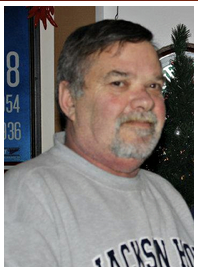 Harold was born on February 3, 1949 in Sault Ste. Marie, Michigan the son of the late Harold and Donna (Ford) Vollick.  He graduated from Sault High School with the class of 1968.  After high school, he went to Vietnam where he served his country in the U.S. Army and attained the rank of SP4.  On May 24, 1975, he married Janet E. Brown at the Central United Methodist Church.

Harold worked as a custodian at Washington Elementary School and Sault High School.  During his many years of service with the Sault Area Public Schools he enjoyed being able to participate in the journeys of many young people’s lives often acting as a mentor.  Harold acquired and cared for a wide menagerie of animals throughout his life from fish to birds to lizards and every imaginable creature in between. His door was always open to another addition to the zoo.  Harold also enjoyed spending time outdoors whether it was at the campground or on a boat with friends.

The family would like to extend a special thanks to the staff and volunteers of the Hospice of the EUP as well as the support and compassion of our family and friends.

According to Harold’s wishes, no public services will be held.  In lieu of flowers donations can be made to Hospice of the EUP or Chippewa County Animal Shelter.