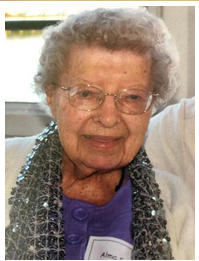 Mom was born on February 20, 1917, in Detroit, Michigan. Her childhood was spent on the Thuemmel family farm where she acquired strong work ethics and the enjoyment of a large family in Port Austin, Michigan. After graduating high school, mom left the farm for the big city of Detroit where she met our father Cleveland C. Sullivan. After a few years in Detroit, they settled in Sault Ste. Marie where they raised five children.

Mom was predeceased by her husband: Cleveland and a daughter: Elaine Reid. Her final resting place will be Oaklawn Chapel Gardens with a celebration of life to be held at a later date. Our family is being assisted by C.S. Mulder Funeral Home. Condolences may be left online at www.csmulder.com

Our family would like to thank Freighter View Assisted Living for the care they gave Mom over the last year and a half. A special thank you to our sister Kathy for her endless devotion these last months.

In lieu of flowers, our family is requesting any donations be made to the Chippewa County Animal Shelter or Hospice of the EUP.

“You can shed tears that she is gone, but smile because she lived – it was a good long life!”