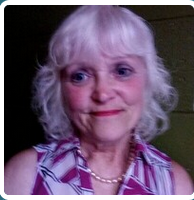 Marilyn Sue Marshall, age 67, of Dollar Settlement passed away unexpectedly on Monday, Jun 29, 2020, at her home near her garden with family present in Dollar Settlement, Michigan. She was born May 5, 1953, in Saginaw, Michigan to Roland and Virginia (Adams) Marshall. She was a 1971 graduate of Arthur Hill High School.

She was a free spirit. She met Roger Dale Hall and jumped on the back of his motorcycle traveling with him all the way to California. Over the next couple of years, their adventures were many, with extended stays in Laguna Beach, New Orleans, and St. Louis. On their return to Michigan, they married and in 1972 she had her first of two children Roger Roland Hall born in Saginaw, Michigan. On Dec 5, 1976, she became a widow losing Roger Dale Hall to an automobile accident. The next year, she moved to a log cabin at Salt Point, Michigan in the Upper Peninsula with Lawrence “Larry” Albert Cole II. It was her dream to go live in the Upper Peninsula. In 1979, her last child Lawrence “Luke” Albert Cole III was born at home in the cabin at Salt Point, Michigan. She loved the simple life at the cabin hunting for mushrooms, picking blueberries, making maple syrup, collecting rocks on the Lake Superior shore, and tending to her gardens. For a time, she lived in Bay Mills Indian Community where she made lifelong friends and was known as Ms. Marilyn or Blondie. She worked for over 25 years in the bakery at Glen’s Market in Sault Ste Marie, Michigan, and then some years at the bakery at Bay Mills Resort & Casinos. She loved to bake. Her pies and pasties were known from Michigan all the way to Texas. She sold them and sent them to family members everywhere. She was known for giving her baked goods to anyone in need as she hated to see anything thrown away or go to waste. In 1996, she made her last move to Dollar Settlement, Michigan. She was a survivor. In 1998, she was in a tragic boating accident on Lake Superior that claimed the life of her companion Lawrence “Larry” Albert Cole II and almost claimed hers. Sometime after launching their sailboat from the narrows near Salt Point, Michigan they capsized. She floated for 29 hours in the cold water of Lake Superior and was found entwined on the rocks of a shoreline in Ontario, Canada. When later asked what kept her alive, she told of wanting to meet her only grandchild Adam Tyler Hall who was just two weeks old. Incredibly she survived, but the accident was physically hard on her health and left her with challenges she endured the rest of her life. In retirement, she enjoyed gardening with Lawrence “Luke” Albert Cole III and taking their goods to the local farmers market or selling them from home. She was passionate about gardening with beautiful flower beds, trees, and vegetables surrounding her home. She enjoyed giving her flowers and plants to anyone who would take them and often brought them with her to give out throughout the community. She enjoyed spending time with her neighbors and friends who were very close and helped each other out. She enjoyed trips downstate to see her Marshall and Adams family. She especially adored and treasured her many cousins, nieces, and nephews. She was a proud Air Force mom. She dearly loved her one and only.

A celebration of her life and a gathering of friends and family will take place at Mission Hill Cemetery on 27 Jul 2020 at 12:00 PM where she will be laid to rest.

In Lieu of flowers, we ask that memorials be made in her memory to the local Boys and Girls Club of Bay Mills.  Checks can be mailed to: 12099 W. Lakeshore Dr. Brimley, MI. 49715 or payment can be made online at PayPal http://paypal.me/bgcbaymills.