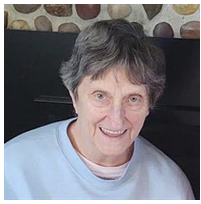 Lauretta Betty Utter, age 85, of St. Ignace, Michigan, died on July 26, 2020, at home surrounded by her loved ones. She was born November 25,1934, in Bay City, Michigan, to Ignatius “Jake” Lokatys and Victoria Banaszak.

Betty graduated high school and attended two years of schooling at Saginaw Business College. Following her time there, she worked with Dow Chemical. Betty wasn’t much of a drinker, but she met both of her husbands in a bar. Ervin Schlehuber managed to win her heart after meeting Betty in a bar after she had gotten in from a ski trip. Together, they raised their family in Bay City, Moran, and Marquette. After 29 years together, Betty became a widow. Later, Betty met Merle Utter at yet another bar where they danced the night away despite Merle being older than her. They married and spent 23 years together.

Betty was a member of the Immaculate Conception Church as well as the Saint Ignatius Loyola Catholic Church once she moved into St. Ignace. She loved bowling in her younger years and still had a passion for baking and cooking long after that. As she raised her family, she always had a house full of kids. There was always enough food made to go around. Even long after her children had grown up, they could still count on her to feed them if they were hungry. Her marriage with Merle was filled with traveling as they took their camper all over the U.S. They had been to Alaska multiple times and enjoyed rock picking, especially for Lake Superior agates. She loved spending time with her grandkids. Her family was her pride and joy. They were her life and her world.