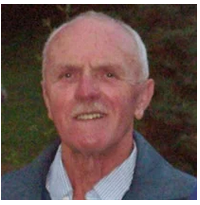 Joseph Anthony Hartman, Jr, age 88, of Drummond Island, Michigan, died on June 16, 2020 of natural causes in his home. He was born on November 8, 1931 in South Bend, Indiana, to Joseph Anthony and Mary Hartman.

Joe loved all of his family. He enjoyed spending time at his cabin in Crystal Falls, Michigan. He also enjoyed hunting, fishing, snowmobiling, visiting with his many friends, and attending church. He was proud of his Catholic faith and helped with many tasks at St. Florence on Drummond Island. Joe was a member of the Moose Club, Veterans of Foreign Wars, Audubon Society, Ducks Unlimited, Michigan Conservation Society, and the Drummond Island Sportsman Club. He had a passion for sports, participating in numerous softball, bowling and golf leagues. He enjoyed watching Notre Dame, Chicago Cubs and Chicago Bears games.

A Funeral Mass will be celebrated at 11:00AM, Wednesday, July 15, 2020 at St. Florence Catholic Church on Drummond Island. Burial will follow at Drummond Island Cemetery.