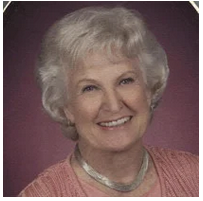 Dorothy graduated from Glendale High School in Glendale, California. She met her future husband after World War II at Glendale City College where she studied secretarial skills. After marrying in 1948, Dorothy worked for Pacific Railroad in downtown Los Angeles. She and her husband began a family while living in La Crescenta, California, then moved their growing brood to Orange, California, where her husband practiced his craft as a mason contractor. Desiring more of a “country” atmosphere, the family moved to Calimesa, California, while her husband progressed into building subdivision homes in San Bernardino, Riverside, and surrounding cities. While residing in Calimesa, Dorothy was active in PTA (Parent Teacher Association) and served as President of the PTA District Council. After their daughter married and moved to Pickford, Michigan, Dorothy and her husband purchased a home in Hessel, Michigan, where Dorothy lived for most of the remainder of her life. The final two and a half years of Dorothy’s life were spent at Cedar Cove Assisted Living, where she received excellent care and was completely content.

Dorothy attended church regularly wherever she lived. The most recent 20 years, she attended the Pickford United Methodist Church. She was a longtime member of PEO, a philanthropic organization for the advancement and education of women.

Services will be held Friday, July 10th at the Pickford United Methodist Church. Visitation will be held from 12:00 Noon until 2:00 P.M. with the funeral service immediately following beginning at 2:00 P.M. Pastor Timothy Bashore will be conducting the service.