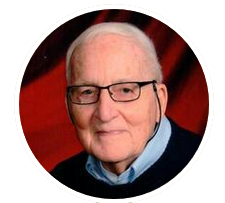 It is with great sadness that the family of Donald J. Gerrie announce his passing, surrounded by his children, on July 18, 2020. He was born on August 17, 1927, in Sault Ste. Marie to Jay W. Gerrie and Leila F. (Sindles) Gerrie.

Don graduated from Sault Area High School in 1945 and served as a Cryptographer in the U.S. Air Force from 1945 to 1947. After discharge from the Air Force, Don attended the College of William and Mary in Virginia where he received his B.A. in Business and earned a Phi Beta Kappa Key. He continued his education and received an M.B.A. from Michigan State University.

During school, Don worked summers at the U.S. Steel Warehouse in the Sault. It was there he met M. Joan Taylor.  They married on April 11, 1953, in Rudyard MI.  Don and Joan moved to Endicott, NY to start a career at I.B.M.

In 1955, they moved back to the Sault so Don could help his father with the family business, The Gerrie Press (an office supply, printing, office equipment, and stationary business). Don enjoyed this as he spent time traveling around the Eastern Upper Peninsula and met a lot of great people.

Don began teaching part-time at Lake Superior College in 1965, became full-time faculty in 1969, and assumed chairperson of the Business and Economic Department in 1970. Shortly after his father’s death in 1971, Don sold the family business and remained full time at the College.  In 1980, he became V.P. of Administration and in 1985 the Director of the MBA Program. This program was most enjoyable and interesting to Don. It allowed him the opportunity to establish branch programs in Alpena, Petoskey, Traverse City, Escanaba, Elliot Lake, and develop a program in Taiwan. He developed many close and long-lasting relationships. Don retired from Lake Superior State University in 1995.

Don was active in the community, serving as President of the Rotary Club, President of the Chamber of Commerce, member of the Salvation Army Advisory Board, and was the first President of the Sault Historic Sites, Inc. He was instrumental in purchasing the freighter Valley Camp from Republic Steel Corporation for development of a Great Lakes shipping museum for the city and acquiring the Tower of History from the Catholic Diocese for use as a tourist attraction.

Don had many hobbies and special interests outside of his work. He enjoyed big band music, Michigan football, Tiger baseball, reading newspapers, meeting new people, and spending time on the water in Brimley. The most important part of his life was his family.

Don was predeceased by his wife of 65 years, M. Joan Gerrie, and his parents.

Entombment will be private at the Oaklawn Chapel Gardens. A public celebration of life will be held at a later date.

In lieu of flowers, memorials may be left to Salvation Army.