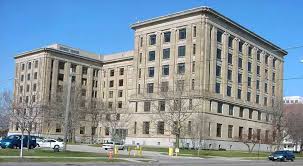 The Cass Building in downtown Lansing, located at 316 South Walnut Street, was built in 1919 and is the state of Michigan’s oldest standing office building.

“Together, Melvin Larsen and Daisy Elliott’s names have become synonymous in Michigan with the protection of civil rights,” Ms. Whitmer said in a statement. “In 2020, we must honor the work of our predecessors who, 44 years ago, outlined in law the vision of what we continue to strive for even today. We must hold up those who worked to build a better Michigan for us all, regardless of race, religion, national origin, sexual orientation, and gender identity. That’s why I am proud to rename the Cass building in Lansing to the Elliott-Larsen building.”

In a statement, Ms. Whitmer said Mr. Cass, who died in 1866, played an important role in Michigan’s and the nation’s early history, but the names the state elevates express the state’s values. She noted that besides owning a slave and defending popular sovereignty, Mr. Cass also implemented a policy forcibly removing American Indians from tribal lands.