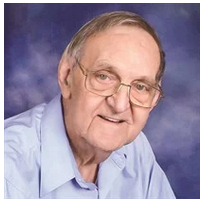 Robert F. Belonga, age 86, of St. Ignace, Michigan, died on Friday, June 19, 2020, at Evergreen Living Center in St. Ignace after a valiant battle with dementia. Robert was born in St. Ignace on November 7, 1933, to Frances and Elsie (Sorenson) Belonga. He was the oldest of eight children.

Bob graduated from La Salle High School in 1951. He married his high school sweetheart, Ann MacDonald on September 5, 1953, at St. Ignatius Loyola Catholic Church. Bob entered the U.S. Army on January 5, 1954, and served for two years, 11 months of which he served overseas. Bob founded Belonga Plumbing and Heating and was the first licensed plumber in Mackinac County.

Bob is preceded in death by his parents; daughter, Lisa Mary; and siblings Jack Belonga, Kenneth Belonga, Molly Chartrand, and Sally Benjamin.
Visitation will be held on Wednesday, June 24th from 6-8pm at Dodson Funeral Cremation Burial Services, 240 McCann St., St. Ignace, followed by a family gathering at Billy Belonga’s home on McCann Street. A private Mass of Christian Burial will be held Thursday, June 25th at noon at the St. Ignatius Loyola Catholic Church with Father Frank Ricca officiating. Bob will be buried in the St. Ignatius Cemetery. His pallbearers will be his grandsons.