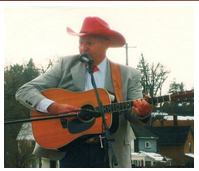 Ray was born on July 17, 1940, in Kinross, Michigan to the late Truman and Doris (Baker) Franks. Ray married Wilma Jean McKenzie in Arkansas.  They were together happily for 52 years.

Ray always said that he had had a good life, doing almost everything he wanted to do and full of people he loved.  His lifelong love of music led him early into singing, playing, and songwriting from county and gospel to Bluegrass. He opened for many big names and formed his own band, “The Can’t Hardly Playboys”. Over the years, he cut many records, CD’s, and DVDs.

Ray and his band received numerous awards and accolades to include “Band of the Year” and “Most Promising Male Vocalist” from the CMAM, and was an honorary member of the Northern Ontario CMA. Ray earned numerous awards for his business endeavors, also. He was always an entrepreneur owning a variety of businesses and was still seeking new opportunities right up to the end.  He was proud to support conservative values and veterans.

Ray had a long and loving relationship with the Lord and was confident in the next life.  He loved his family and friends greatly with his biggest regret at the end being his inability to see them.  He said that he hated to leave his loved ones here, but was looking forward to a reunion with all his family and friends who went before him.  Those of us who knew and loved Ray are confident they are having a big reunion and jamboree.

Ray was preceded in death by his parents and children: Gregory Franks and Rick McKenzie, and siblings: Clayson, George, Jim, Thelma, and Jenett.