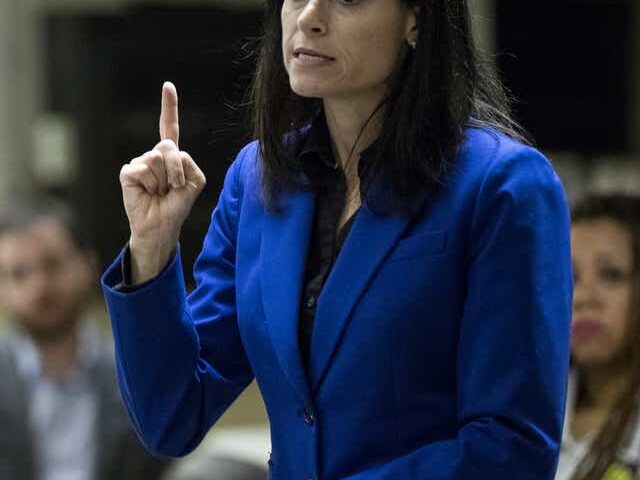 As the nation moves toward police reform, Michigan Attorney General Dana Nessel on Tuesday proposed a list of ideas to make the state’s police more accountable.

Nessel’s plan stops short of calling to “defund the police,” which some reformers have said would mean cutting or re-prioritizing police budgets, one of the largest taxpayer expenditures in most municipalities.

Nessel received some blowback after a June 6 post she made to Twitter, sating she was “saddened by the demonization of all police officers and calls to defund law enforcement.”

“Calls to abolish police departments and destroy their funding sources are not the solution,” she said in a response to the ensuing threat. “My heart breaks for those who have been the subject of police brutality and officers who engage in such conduct should be held fully accountable.”

Accountability, not defunding, is at the heart of Nessel’s proposed plan.

At the foundation of Nessel’s plan is a call to grant more oversight powers to the Michigan Commission on Law Enforcement Standards (MCOLES), the agency that licenses police.

“But, in many respects, MCOLES lacks sufficient authority to oversee law enforcement professionals and to revoke the licenses of police officers who demonstrate poor moral character or violate the public trust,” a statement issued by Nessel’s office said. “The proposals aim to create oversight for law enforcement agencies and their officers similar to many of the professions and professional licenses required across the state, along with a comprehensive approach to evaluating misconduct complaints and imposing disciplinary actions by a single agency, MCOLES.”

“Unfortunately, these limitations – coupled with the added protections of collective bargaining agreements – can make it very difficult to strip a law enforcement officer of his or her authority until it is too late,” a summary of the proposed reforms said.

According to the Attorney General’s Office, due to union contracts and rules, disciplinary records are often purged from an officer’s personnel file after a period of time, which can “make it harder for agencies to fire bad cops and it deprives the public of complete information about an officer’s disciplinary history.”

“There should be a centralized registry of misconduct that is accessible by the public and to law enforcement agencies across the state to make it more difficult for a bad officer to move to another jurisdiction,” Nessel’s office said.

Chris White, the director of the Detroit Coalition Against Police Brutality, an organization that’s often critical of law enforcement, said problematice cops seem to easily “hop” from department to department and “by the time they’re finally driven out of law enforcement, they damages lies sometimes in three or four different municipalities.”

White supports the proposed changes but believes the public has to play a larger role. He likes the idea of MCOLES taking on more power to fire and suspend officers but worries law enforcement bias could remain, since nearly everyone who sits on the MCOLES board is current or former law enforcement.

“Our views are not being represented adequately,” he said. “It’s just a law enforcement organization … In order to eliminate police brutality we have to have a fair representation of community leaders.

” … As advocates, we can’t trust the police to police the police.”

White said he was “impressed” with some of Nessel’s bold proposals, since he expects she’;; receive a large amount of resistance from the powerful police unions.

“Its hard to reform policing because it’s an industry with agencies that don’t really want to partner with communities … “White said. “They have no problem doing public relations stunts, but real, community-led policing, that’s a problem with reforming police departments.

” … Police departments inability to be transparent … also leads to problems with reforming. They want reform on their terms, if they want reform at all.”

While many officers continue to receive retirement benefits or other perk, regardless of their conduct, Nessel’s office said officers who severely injure or kill a member of the public in the course of duty through misconduct or excessive force” should not receive ongoing financial benefits from the public.

Requiring agencies to report use-of-force incident data is of public interest and can be “critical to identifying issues of systemic racism, bias or inadequate and improper training,” Nessel’s proposal summary said; and requiring an independent investigation into police-involved civilian deaths “can help ensure the investigations and prosecutions are impartial and will help bolster public confidence in the process.”

The Police Officers Association of Michigan, a union that represents hundreds of departments across the state, isn’t ready to weigh in on Nessel’s specific proposals.

They would, however, like to be part of the reform process, said Kenneth E. Grabowski, legislative director for the union.

“The attorney general and many other elected officials are issuing press releases with proposed language and they are doing it without conferring with the stakeholders, such as a Police Officers Association of Michigan,” Grabowski said. “The Attorney General’s statement said that they are going to … work with some of the different groups that it affects, so we look forward to working with her and trying to resolve some of the issues.

Grabowski declined to elaborate. “We still have to look it all over,” he said.

“There is some merit to her … seven proposals and we have actively been working with legislation on training reform, community police options, so we’re here to be a leader in reform and work with the communities we serve to best keep them safe,” Saxton said. “They are all a great starting point for the conversation. I think some of them need legislation to be enacted.

“Some of them need all parties to sit down together … and some of them are already being done.”