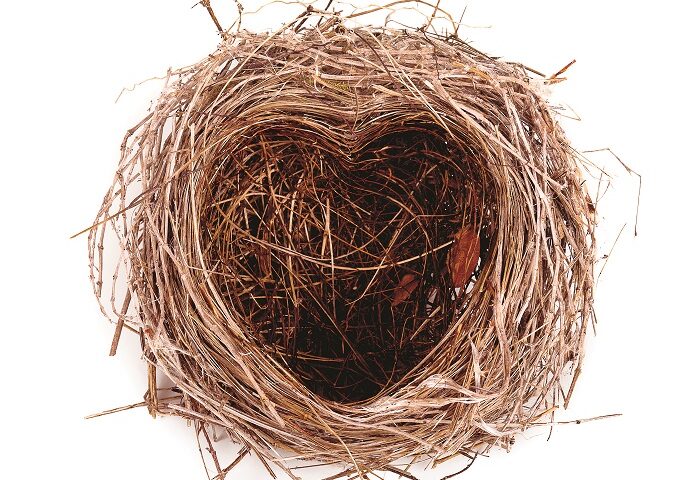 My maternal grandmother was a nester. She didn’t have much in the way of money, but her heart was worth a pile of gold.

Her house was old and a little decrepit, but she did the best she could with what she had. From the outside, it wasn’t pretty by most people’s standards, but it was interesting to look at, as if it had many stories to tell. It was halfway down a short gravel road, so it looked slightly tilted, as if it were thinking or pondering on something. It overlooked Canada, and we could hear the ships’ horns as they went through the locks on the river. Canadian geese and seagulls flying overhead never failed to soothe my soul.

In spring, gorgeous lilac bushes would cover the face of her house, making it beautiful to look at. The house seemed to smile when those fragrant lilacs bloomed. Whenever I stepped up to the porch, I wanted to linger there just a minute longer so I could inhale their beautiful fragrance.

The hinges squeaked as I opened the door to the front porch. Grandma had it piled with old newspapers stacked on tables surrounding an old sofa. The porch was lined with windows, and because of the gravel road, they were frequently very dusty, but I didn’t mind. What kid does? All I cared about was the warmth of Grandma’s house—not the heat kind of warmth, but the tingling kind that hit me in the gut every time I stepped into it. It spoke of love, safety, and that cozy feeling of home, and I never wanted to leave.

When it rained, it was like the windows were crying, with the dust running in rivulets down the panes of glass. On those days, it was easy to curl up on the old, brown sofa with one of Grandma’s quilts and wonder about things.

Entering the main part of the house was like taking a step back in time, another era when life seemed simpler. I can still recall the heavenly aroma of freshly made bread in the oven. In the background, I could hear the crackle of the wood stove, where Grandma kept a teakettle set on top, ready when anyone stopped by and stayed for a cup of tea. And when that happened, her guests didn’t get tea in any old cup. Grandma was infatuated with the English custom of high tea, so she served the tea in fine bone-china cups from England, along with a piece of cake or pastry. The china cups were mismatched, but that was the charm. Today, that’s called granny chic, but back then, it was pure Grandma.

The kitchen was her domain, and nobody knew her way around a kitchen like Grandma. She had a big Hoosier cabinet where she would make bread in the morning. It stored everything she needed: flour, sugar, and salt. The kitchen table was covered in a red-and-white checkered oilcloth. Often, there would be a little jar of forget-me-nots in the center of the table that I had picked from her yard. You would have thought I had given her expensive orchids, she made such a fuss over them.

Although her house no longer stands, in my memory, it lives on forever. Along with her beautiful quilts, her mismatched china teacups, and her down-to-earth ways, she passed on to me her wonderful passion of nesting. And what a wonderful gift that is.

______
The above story was written by our contributor, Laurie Davis, and appeared in the April/May issue of Mary Jane’s Farm magazine. If you would like to subscribe to the magazine visit: maryjanesfarm.org.