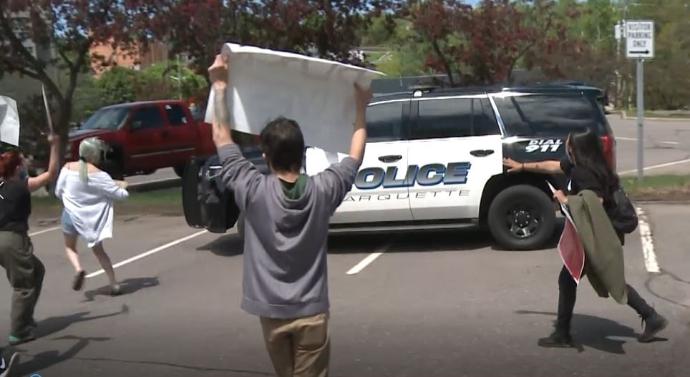 MARQUETTE, Mich. (WLUC) – What started as a peaceful demonstration against police brutality Saturday afternoon escalated when a woman stood on the front of a Marquette City Police SUV in the Police Department parking lot.

Monday’s death of George Floyd in Minneapolis sparked more protests across our country Saturday, including Marquette. The police officer that knelt on Floyd’s neck has been charged with third-degree murder.

Protesters began on the campus of Northern Michigan University and marched down Third Street, chanting and carrying signs, to the police station.

Tensions mounted when demonstrators started yelling questions at a Marquette City Police officer. No arrests or injuries were reported.

NMU junior Ashley Martinez is one of the organizers of the demonstration, called Public Against Police Brutality. She urged participants to remain peaceful before the protest started.

“Be peaceful. Don’t incite violence. If the police get violent with you, just be as safe as you can for yourself. We’re going to be this as peacefully as we can. I’m hoping that we can stay six feet apart and follow all the COVID-19 regulations. There are kids here so I want people to be as safe as possible but spread the message,” Martinez declared.

The City of Marquette Police Department has always had a great relationship with the public. I think Marquette is a special place, our police officers live and work in this community and they take pride in the work they do. I am very proud of the work they do day in and day out to keep our community safe.

I know this has been a difficult and stressful time for everyone. Please remember to be kind to one another as we navigate our new normal. We’re in this together, Marquette,” Mayor Smith stated.

Meanwhile, those involved in Saturday’s protest intend to continue to speak out.

Martinez expressed her displeasure with the Floyd case and the lack of response from authorities.

“When you go rob a bank, the driver gets charged. They watched him die. He said ‘I’m going to die here. I can’t breathe.’ They were holding him down. [The officer] didn’t even move when the paramedics were trying to check his pulse. That was not ok. All four of them should get charged as accomplices. I think even manslaughter is not enough,” Martinez announced.

Martinez also urged everyone to exercise their civic duty on Election Day.

“People need to go out and vote for people who they know are going to represent them in the best way possible. We need our voices heard and that’s the best way to do it. We need the police to be on our side too. and we know there are a lot of police that are on our side. We just need them to stand up for us too. We need good cops to tell bad cops ‘you’re out of line, that’s not OK,” Martinez urged.