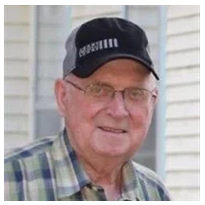 Donald Joseph Ogston passed away on June 17, 2020, surrounded by his family, at Ball Hospice House in Sault Ste. Marie, Michigan. He was 83 years old.

Don was born in Sault Ste. Marie on October 11, 1936, to Thomas and Kathleen (Hall) Ogston. He graduated from Pickford High School in 1954 and moved to Lansing to work at the Oldsmobile plant. He then joined the United States Army and was stationed in Germany for the majority of his active duty. Don married the love of his life, Barbara Hancock, on June 29, 1963, at Nativity Catholic Church in Sault Ste. Marie. They moved to Marquette for Barb to finish her teaching degree and then returned to Bruce Township where they raised their three daughters, Donna, Nancy and Joy. Don was a Teamster Union truck driver for I.L. Whitehead, then a loader operator for Soo Gravel & Asphalt and finally for Northern Sand and Gravel until his retirement.

Don was a member of Holy Family Catholic Church, Knights of Columbus, American Legion and Teamsters Union. He dearly loved their tiny poodle, Dolly, who was his constant companion. He enjoyed golfing, snowmobiling, making maple syrup, four-wheeling and camping. He especially enjoyed playing country music on his guitar and mandolin and having a beer in the garage with family and friends.

A Funeral Mass will be held at Holy Family Catholic Church in Barbeau at 4:00 p.m. Tuesday, June 23, 2020 with visitation for one hour prior to the service. Interment will follow in the family plot at Oaklawn Chapel Gardens.

Memorial gifts may be sent to Holy Family Catholic Church.