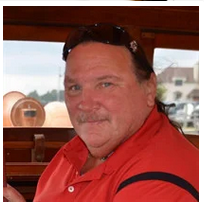 Charles Maurice “Charlie” Collins, age 62, of Cedarville, Michigan, died peacefully on June 23, 2020 at the home of his daughter and son-in-law in Cedarville, surrounded by his family. He was born in Dr. Blue’s office on Cedarville Bay on August 20, 1957 to George Thomas and Mary Margaret (Carr) Collins.

Charlie was a resident of Cedarville and Ft. Lauderdale, Florida. Charlie received a unique education by starting school each fall in Cedarville, and being from a resort family, he and his family left for Florida each November and he continued his schooling in Florida until April 1st when he and his family would return to the school in Cedarville, from which he graduated in 1976. After graduation, he assisted his father, George, in operating the Spring Lodge in Cedarville which was built by his grandfather, Charles Collins, in the 1930’s. Charlie was loved by all of the Spring Lodge customers through the years as he took time to visit with them, made sure their minnow buckets were full, and kept their boats ready for fishing and sightseeing in the islands.

Charlie enjoyed riding his Harley, his Wednesday afternoons with “the boys”, many happy times with friends at various places in the Les Cheneaux Islands, boating in the islands and on over to Mackinac, reading The Detroit News in his car each morning at the Hessel Marina in recent years, deep sea fishing in Florida where he spent his winters, and enjoying time with his Florida friends.

Charlie was a member of the Broward County Sheriff’s Advisory Council and The Merganser Duck Camp.

A public visitation will be held Wednesday, July 1 form 4-7pm and Thursday, July 2nd from 10-11:30am at R. Galer Funeral Home in Pickford. A procession to Cedar Cemetery in Cedarville will begin at 11:30am for a graveside funeral service at 12 noon.