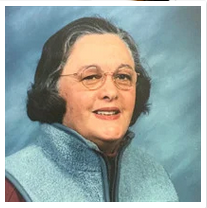 Alda Aurora Routhier, age 85, died May 27, 2020, at the J. Wedum Residential Hospice in Brooklyn Park, MN. She was born in New Bedford, MA, on October 2, 1934. She was the daughter of Captain Emanuel T. Chantre and Alda Oliveira Chantre.

Alda graduated from New Bedford High School in 1952 and earned a Degree in Nursing from LSSU in 1974. She was a Korean Veteran, having served in the U.S. Navy. She carried on the tradition of Service as a School Nurse and retired as the director and instructor of the Allied Health program at the Sault High School and Career Center.

Alda cared for her community and her Church. She was a member of St. Joseph’s Catholic Church and performed in the Church Choir. Her favorite Pass-times were to play bridge and spend time with her family.

In Lieu of Flowers, the family would appreciate Contributions in Alda’s memory to the hospice of Chippewa County or the St. Joseph’s Church food pantry.