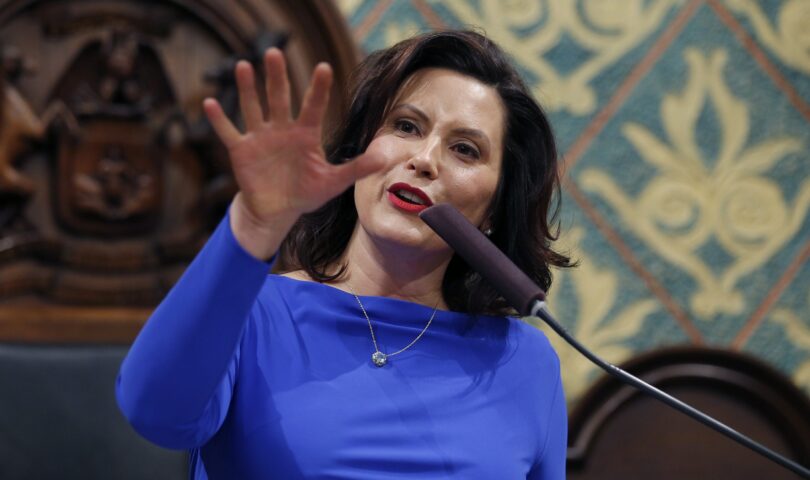 Gov. Gretchen Whitmer said Tuesday that her husband was making “a failed attempt at humor” last week when he asked the marina in Antrim County where they have a second home if it would jump him ahead of the line to get their boat docked based on his being married to the governor.

Ms. Whitmer’s emergence as a serious contender for the Democratic nomination for vice president put some national fuel behind the story, first reported in The Detroit News based Facebook posts by a marina staffer who said Marc Mallory had made the request of him and then the marina itself. Further controversy sparked with Sen. Tom Barrett (R-Charlotte) saying that he took down a Facebook post about the situation over the weekend after someone on the governor’s staff contacted the office of Senate Majority Leader Mike Shirkey (R-Clarklake) and asked them to request Mr. Barrett delete the post because the allegation was false.

The governor has been the subject of a number of outright falsehoods and hoax conspiracy theories on social media since the COVID-19 pandemic began, but her office in statements to the News and the Detroit Free Press refused to confirm or deny the allegation about what Mr. Mallory said. At a 3 p.m. news briefing Tuesday, more than 24 hours after the News story hit, Ms. Whitmer addressed the controversy. She confirmed the conversation happened but called it a “failed attempt at humor” by her husband.

“Knowing it wouldn’t make a difference, he jokingly asked if being married to me might move him up in the queue,” she said. “Obviously, with the motorized boating prohibition in our early days of COVID-19, he thought it might get a laugh. It didn’t. And to be honest, I wasn’t laughing either when it was relayed to me because I knew how it would be perceived. He regrets it. I wish it wouldn’t have happened.”

The situation involved NorthShore Dock LLC. The owner of the marina, Tad Dowker, posted in a since-deleted Facebook post that a member of his staff reported to him that after they explained to Mr. Mallory there was no way they could accommodate his request to place his boat in the water over Memorial Day weekend given how behind they were, Mr. Mallory said, “I am husband to the governor, will this make a difference?” the News reported.

Mr. Dowker deleted his post, but then the marina posted to its Facebook page that Mr. Mallory was respectful and understanding, the News reported.

“Using your wife’s political office to score favors is not a laughing matter,” she said in a statement “How many times has Governor Whitmer’s husband told this ‘joke’ to gain special favors from businesses? The only joke here is that Governor Whitmer doesn’t seem to understand how serious it is for a family member to misuse your office.”

There was some additional question about whether Ms. Whitmer’s entire family was at their Elk Rapids home. On Thursday, Ms. Whitmer at a news briefing asked residents living elsewhere in the state to think long and hard about traveling Up North, which the governor has moved farther along in the reopening process than other parts of the state. Ms. Whitmer said only Mr. Mallory went to the home.

The governor has banned travel within the state for vacation purposes though travel to a second home is allowed.

“My husband did go up to our place in Antrim County and raked some leaves and came home,” she said. “So he was there. We did not all pile in the car to go enjoy our second home although that would have been permitted if we had. But the fact of the matter is he was there briefly for a night, I think one or two nights, and came right back home after he raked our leaves.”

Mr. Barrett on Friday had shared Mr. Dowker’s Facebook post to his own Facebook timeline and it went viral. Mr. Barrett said in a Sunday Facebook post he felt he had verified the veracity of Mr. Dowker’s post and that he was the legitimate owner of a marina. Friday night, a Senate Republican Caucus staff member contacted him, asking if he would consider taking the post down because a staff member in the governor’s office had communicated to the caucus that the allegation was untrue.

“I take my integrity very seriously, and I have deep opposition to many of the governor’s policies, but I would never purposely spread misinformation about her or anyone else,” Mr. Barrett posted Sunday night. I confirmed again with my source, but since I couldn’t trace it further that late at night I decided to take it down out of an abundance of caution and a hope for our state and the integrity of the office of the governor that it was not true. On Saturday morning I was quickly able to reverify the content from the original post … I privately sent word back to the governor’s office that I would never again give them the benefit of the doubt.”

Mr. Barrett could not be immediately reached Tuesday regarding the governor’s explanation of what happened.

Amber McCann, spokesperson for the Senate Republican Caucus, declined to comment on what communication occurred between the governor’s office and the staff of Mr. Shirkey regarding Mr. Barrett’s Facebook post about the situation.