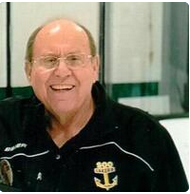 Max was born on August 28, 1949, in Sault Ste. Marie, Michigan to the late AJ and Vi (Milligan) Metro.  He graduated with the Sault High Class of 1967 and went on to earn his Associate’s Degree from Ferris State University.  Max served his country in the Army National Guard.  He married Carol Stevenson on September 6, 1969, at the First United Presbyterian Church of Sault Ste. Marie.  They celebrated 50 years together last Fall. Max was a corrections officer at Camp Koehler for 20 years and was a member of Calvary Baptist Church for many years.  He was an avid sports fan and loved watching his grandson play hockey and baseball; and his granddaughters play basketball and volleyball.  He spent endless hours at the rink watching the Soo Lakers. He was a fan of Lady Lakers basketball and all Sault High School sports.

Max was preceded in death by his parents; and his father-in-law:  Donald Stevenson.

A memorial service will be held at a later date when restrictions are lifted.

In lieu of flowers, contributions may be made to Hospice of the EUP or the Calvary Baptist Church in Sault Ste. Marie, Michigan.