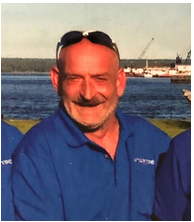 George graduated from Brimley High School with the class of 1982.  When he turned 18 he went to work at U.P. Tire and he spent 37 faithful years there.  He enjoyed helping people and he liked to chat. George also worked for Quaker State on Saturday for 14 years.  He also enjoyed his toys (especially his Kubota Tractor), and going to tractor pulls and mud runs.  He most enjoyed spending time with his children, grandchildren, and great-grandchildren.

George was preceded in death by his parents: George and Anna Hill; his father and mother-in-law: James and Gladys Ellis; a sister-in-law: Mary Bunting and a brother-in-law: Bradley Ellis.

Per George’s wishes, there will be no public viewing.  A memorial service will be held at a later date.  George is off to be with his furbaby: Roxee. In lieu of flowers, contributions may be left to help with the funeral expenses.  A special thanks to the Hospice of the EUP, for their great care.