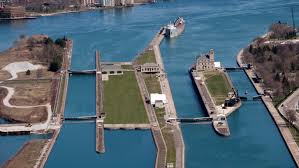 SAULT STE. MARIE (WJRT) – The first phase of a billion-dollar expansion of the Soo Locks is scheduled to begin next week.

The project will begin by deepening the St. Mary’s River upstream and downstream of the locks for $53 million over two years.

Eventually, a third lock will be construction that is capable of accommodating the largest vessels on the Great Lakes. Only one of the two existing locks can handle 1,000-foot freighters.

The new lock will be 1,200 feet long and 110 feet wide when it opens in about seven years.

When the deepening project is complete, contractors will begin reinforcing and stabilizing walls along the approach channel, which would allow vessels to tie up while waiting their turn to pass through the locks.

Engineering and design of the final phase of constructing the new lock was about 70% complete this week.

The Soo Locks are located on the St. Mary’s River between Sault Ste. Marie, Mich. and Ontario. They lift and drop vessels 21 feet between the different levels of Lake Superior and Lake Huron.

The complex currently has two main locks — the MacArthur lock that is about 700 feet long and the Poe lock that is 1,200 feet long. Two other locks are not used very often.

The locks carry 80 million tons of cargo every year that is crucial to the U.S. manufacturing industry. The U.S. Department of Homeland Security has concluded a sudden closure of the single lock capable of carrying the largest freighters would be catastrophic to the economy.