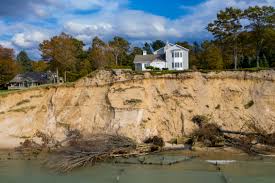 MACKINAC COUNTY, MI — The Michigan Department of Transportation is set to begin a $3.2 million project to move US-2 away from the Lake Michigan shoreline.

The project, which will affect 1.4 miles of the scenic Upper Peninsula roadway from Prater Boulevard to just west of the Cut River Bridge, will begin in April 27. The project has an estimated completion date of Sunday, Nov. 15.

According to MDOT, sinkholes and erosion have caused the roadway to improperly settle, creating a need to move the roadway 350 feet north. The project was planned for 2021 but was moved up to 2020 when evidence showed accelerated movement of the existing slope and pavement.

Most of the initial work will take place off the current highway alignment, meaning both lanes of traffic will remain open between April 27 and May 27 with intermittent daytime shoulder closures and a speed reduction to 45 mph when workers are present.

Subsequent work will require single-lane closures with alternating lanes of traffic, according to MDOT.

The road construction project is considered an essential function and will not be impacted by Gov. Gretchen Whitmer’s stay-at-home order.

High water and strong wave action have caused damage to shoreline roads and homes across the Great Lakes in recent months.