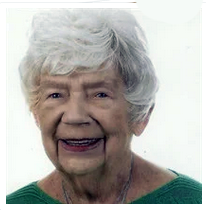 Sadie graduated as Salutatorian of the class of 1946 from Cedarville High School. She married Richard “Richie” Edwin Nye at Presbyterian Church in Sault Ste. Marie on June 6, 1947 and started a family.

Sadie and Richie owned Nye Motel and Apartments and Sadie worked part time as secretary of Nye Construction. They enjoyed vacationing at their winter home in Palm Harbor, Florida and liked to spend time on Honeymoon Island, boating, swimming, and seashell picking. In their golden years they enjoyed time at their log cabin near DeTour, Michigan.

Sadie was a member of the First Union Church of Cedarville. She was a volunteer curator of the Lex Cheneaux Historical Maritime Museum for many years and is a Past President of the Les Cheneaux Historical Association. Sadie served as Guardian for the Job’s Daughters Bethel #79 in Cedarville. She was very active in the Order of the Eastern Star and served as Worthy Matron of Star of the North Chapter 526 and as Star Point Ruth for the State of Michigan Grand Council.

Sadie enjoyed working in her flower garden, refinishing antique furniture, and reading books. One of her favorite activities was deer hunting. She shot the biggest buck in the woods behind William Nye farm.