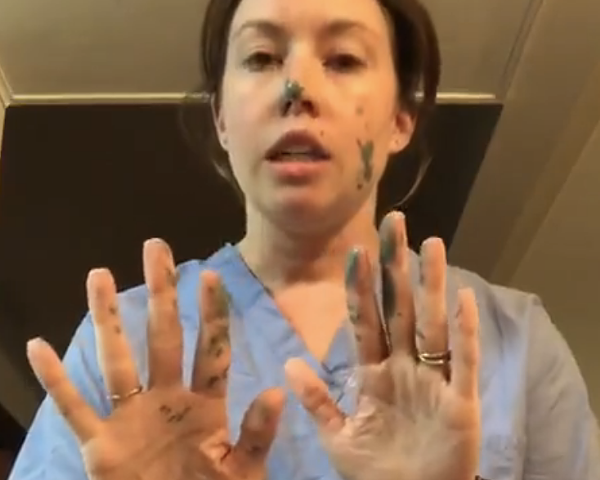 Saginaw clinician Molly Lixey took to Facebook for what she called a “Molly rant” to demonstrate the dangers of cross-contamination while wearing gloves by using house paint and a scenario millions of Americans are now concerned with: grocery shopping during the coronavirus pandemic.

“I’m seeing a lot of people out in public wearing gloves right now. That’s great. If you want to wear gloves, that’s all fine and well, you absolutely can,” Lixey says in the video. “But I want to remind you of a little thing called cross-contamination.”

Lixey, a former emergency room nurse who now works at an infusion clinic, then goes through the motions of a shopper in their car at Meijer, readying herlself to go inside the store by putting on disposable latex gloves. She makes a strong case for our cell phones as being a major culprit in cross-contamination, even if a shopper were to wipe down their cart while wearing protective gloves.

Throughout the demonstration, Lixey picks up a paper plate, used to reference toilet paper, and then puts paint on her gloves to show that she had just picked up whatever germs were attached to that item. She then picks up her cardboard phone to respond to a text message, during which, of course, she transfers the green paint to her phone. She also touches her face, takes a phone call, and suddenly, her face is covered in green paint.

When it comes time to dispose of the gloves, which are not recyclable, by the way, Lixey sternly reminds viewers to put them in the trash, not in the parking lot next to your vehicle, which has become a dangerous nation-wide trend as people carelessly navigate COVID-19 cautionary measures.

The demonstration concludes with an un-gloved Lixey getting into her imaginary car where she then takes a call on her cell phone, now a germ bomb, and holds it to her face, also, now, a germ bomb.

“There’s no point in wearing gloves if you’re not going to wash your hands every time you touch something,” she says. “There’s no point, friends.” She goes on to say that the biggest takeaway is to avoid touching your phone or your face when you have had contact with grocery items or other possible contaminated surfaces.

“It terrifies me to think people believe they’re safe only because they are wearing gloves and not have them be aware that they could still be harming themselves or others,” Lixey told CNN. “I understand as a nurse I have had extensive training in the use of PPE, but many people in the general public have not. They are all so fearful right now they will do anything to protect themselves, but it’s important they do so properly.”

The coronavirus, which has been proven to be contracted through person to person via “respiratory droplets” that are expelled when someone coughs or sneezes, may also infect someone by talking or breathing due to the “aerosolized” effect,some scientists and infectious disease experts have found. In other words, droplets can just hang in the air, hence the Centers for Disease Control and Prevention’s recommendations to keep six feet of distance between you and others, frequent handwashing and/or sanitizing, and that all people should wear non-surgical cloth face masks when leaving the house.

You can watch Lixey’s video below.