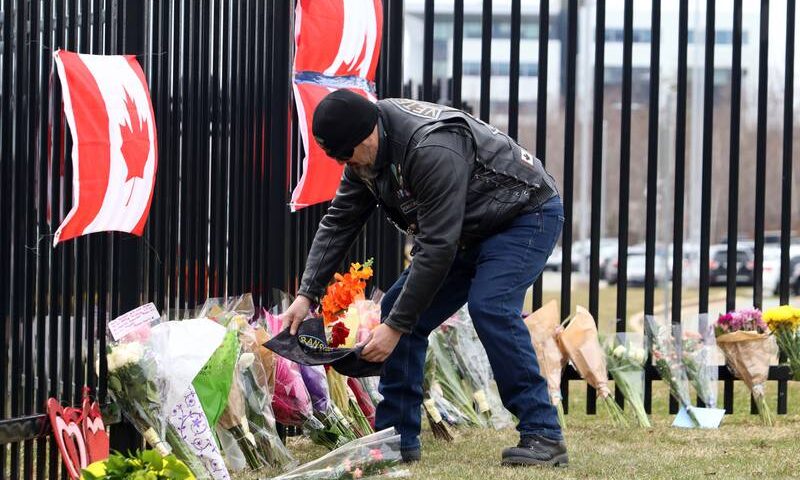 HALIFAX (CP) — A source close to the investigation says a killer’s murderous rampage across Nova Scotia began with him attacking and binding his girlfriend, and that she managed to escape and eventually give crucial details to police.

The woman was in a domestic dispute with Gabriel Wortman and was beaten and allegedly bound in some way Saturday night before she managed to get away from a residence in Portapique, N.S., the source said.

The source said the woman hid, but emerged early in the morning to provide police with the critical information that the 51-year-old denturist was driving a replica RCMP patrol vehicle and wearing a police uniform.

John Hudson, who had known Wortman’s for about 18 years, said the Halifax man was sometimes openly controlling and jealous of his long-time girlfriend.

“I didn’t see him hitting her or anything like that,” Hudson said in an interview. “But I know they fought.”

Hudson recalled a bonfire party about 10 years ago when an argument between the two left the woman locked out of their home in rural Portapique, which is where Wortman started killing neighbours on Saturday night.

“I was with her, trying to get her stuff out of there,” Hudson said. “People had been drinking … and it was a crazy night … and he didn’t want her to leave — but he wouldn’t let her in the house.”

Hudson said at one point, Wortman removed the tires from the woman’s vehicle and threw them into the ditch to prevent her from leaving.

The details of the gunman’s assault on his girlfriend Saturday are the latest to emerge about the chaos that ensued as police sought the gunman as he went about rural Nova Scotia killing people in five communities and setting homes on fire.

The search for the suspect stretched from late Saturday night to Sunday morning, when the death toll rose to 22 as the gunman, wearing an authentic RCMP uniform, evaded police in his replica RCMP cruiser.

RCMP could not immediately be reached for comment on the reports but have said they will release a detailed account of the April 18-19 incidents Friday morning.

Police have also said he didn’t have a firearms licence for the guns he was using, though how Wortman obtained the weapons remains unclear.

Audio recordings of first responders communicating on two-way radios provide a glimpse of the frantic attempts to help the first victims found Saturday at 10:40 p.m. amid burning homes in the village of Portapique.

On one of the recordings, stored on the Broadcastify website, first responders dispatched to the scene along Highway 2 tell the dispatcher they can see something burning in the distance.

“I’m seeing huge flames and smoke from where we are,” says one, minutes before the dispatcher says police have discovered a gunshot victim on Portapique Beach Road.

Within the next 20 minutes, the extent of the carnage came into sharp focus as police called for more ambulances — twice.

It’s unclear exactly how many people were killed along Portapique Beach Road, which includes many seasonal and permanent homes along the picturesque north shore of Cobequid Bay.

Police confirmed Wednesday that the suspect managed to escape from a perimeter they had set up around the rural area, but they didn’t realize he was gone until some time between 7 a.m. and 8 a.m. on Sunday when his girlfriend — whom they have described as a “key witness” —revealed details about the fake police car.

Hudson said his neighbour had been purchasing used police vehicles at auctions, referring to one unmarked vehicle that was spotted behind Wortman’s denture clinic in Dartmouth after the killings. It has since been towed away.

“He picked the best one and brought it up here, had it in his garage and (added) decals to look just right,” Hudson said.

“He was very meticulous on everything he did … He also trained himself on electronics, so he’d know how to hook up the lighting and everything like that for the car.”

The vehicle, a late-model Ford Taurus, was kept in a garage at another property that Wortman owned on a neighbouring street, Hudson said.

He said the information the girlfriend provided to police was crucial to stopping the gunman.

“If it wasn’t for (her) giving that information, it would have been a lot worse,” said Hudson. “They wouldn’t have known to be looking for an RCMP car.”

Heavily armed RCMP officers fatally shot the gunman at a gas station in Enfield, N.S., about 90 kilometres south of Portapique at around 11:30 a.m. on Sunday, by which time had commandeered another vehicle.

Police said the gunman acted alone during his violent rampage, but investigators said they are trying to determine whether anyone assisted him before the shooting began.

This report by The Canadian Press was first published April 24, 2020.