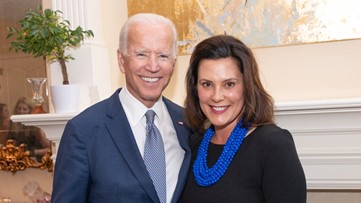 (FREEP.com) – Gov. Gretchen Whitmer is getting national attention for her role as Michigan’s leader during the coronavirus pandemic.

Now comes the news that she’s being considered as a potential vice presidential candidate.

Biden replied, “She hasn’t lengthened the list. She made the list in my mind two months ago.”

What was Whitmer’s response to Biden’s comments, which were released in a preview clip on Tuesday before “The 11th Hour” aired?

Whitmer’s spokeswoman Tiffany Brown said in a statement, “The Governor is flattered that Brian Williams would ask and that the Vice President would mention her, but right now she is focused 100% on doing everything she can to slow the spread of the coronavirus and protect the people of Michigan.”

With the emergence of the coronavirus in Michigan, Whitmer has issued a stay-at-home order and spoken out about the state’s need for more tests and medical equipment to slow the spread of the virus, treat those who are ill and help doctors, nurses and other health workers protect themselves on the job.

Whitmer has been critical of the federal government’s response to the pandemic and its lack of planning. In turn, Trump has lashed out at her in tweets and to the press.

On Friday, he informed reporters that he had told Vice President Mike Pence not to call “the woman in Michigan.”

The clash prompted the creation of a T-shirt by a Farmington Hills woman that bears a map of Michigan and the words, “I stand with….that woman from Michigan.”

The White House announced Saturday that Trump had approved Whitmer’s request for a federal major disaster declaration for Michigan related to the coronavirus.

In a news release, Whitmer expressed appreciation for the approval as “a good start,” but noted that it didn’t cover the state’s request in full.

She is also a national campaign chair for Biden, who already has pledged to choose a woman for vice president if he wins the Democratic nomination.

Biden also revealed Tuesday that while he is still working on his list of potential vice presidents, the final version probably will include six to ten names.