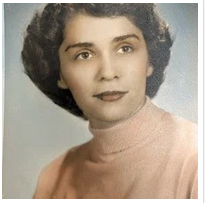 Irene Joyce Bailey, known best by her life-long nickname “Mickey”, age 88, of Canadian Lakes, Michigan, passed away peacefully with her family by her side at her home. She was born to Mack and Mary Alexander of Rexton, Michigan, the fifth of eight children which included her siblings Alice, Fred, Shirley, Mary Lou, Mickey, Betty, Peter, and Pat.

Mickey went to school in Rexton through the tenth grade and finished school at LaSalle High School in St. Ignace, Michigan, boarding with several families there during those years. While in high school she worked part-time as a typist for the Brown Law Firm. After her schooling, she was employed by Michigan Bell as a telephone operator, leaving that position to marry Edgerton “Warren” Bailey at Goodfellow Air Force base in San Angelo, Texas on February 23, 1954. After leaving the service, they resided in the Lansing, Michigan area where Warren was employed with the Michigan Department of Transportation. They later moved to Canadian Lakes following retirement. Both she and her husband loved the area in which they retired, watching birds, deer, and wildlife outside their home along with enjoying regular visits to their cabin on Drummond Island, Michigan.

Her passing is mourned by all who knew her including her large extended family. Her pleasant and happy demeanor and sense of humor will be greatly missed.

Funeral services to be conducted at a later date with burial to take place at Epoufette Cemetery in Epoufette, Michigan near where she grew up.

The family is being served by both the Janowicz Funeral Home in Remus, Michigan, as well as the R. Galer Funeral Home of Pickford, Michigan.