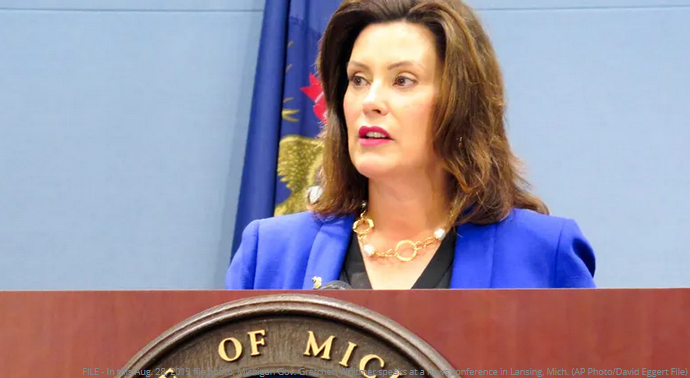 LANSING — Gov. Gretchen Whitmer said Friday she hopes for some relaxing of the state’s “stay home” order on May 1, when it is set to expire.

At a Friday afternoon news conference, Whitmer said the state’s economy will reopen in phases, with low-risk sectors returning to work first. Some of the easing of restrictions could also happen on a regional basis, “depending on what the data tells us,” she said.

In assessing whether a specific workplace is ready to open, officials will look at factors including arrangements for workplace social distancing, employee screening, facilities for hand washing, and availability of personal protective equipment, among other factors, Whitmer said.

Whitmer said she expects to detail some of her plans at a series of news conferences next week, to be held Monday, Wednesday and Friday.

Earlier in the day, Whitmer, appearing on “Good Morning America” on ABC, said any easing would depend on science and data, which is subject to change.

Whitmer, a Democrat, and six other Midwest governors said Thursday they will work together as a region to coordinate the reopening of their economies.

Host George Stephanopoulos pointed out to Whitmer that Ohio Gov. Mike DeWine, a Republican, said Thursday he wants to start reopening that state’s economy May 1.

Whitmer said that working together does not mean that Midwest governors will act in lockstep.

With the third-highest number of COVID-19 deaths in the country “we have a unique crisis” and “we need a unique solution,” Whitmer said of Michigan.

However, “I do hope to have some relaxing come May 1,” she said.

Having said that, “it’s two weeks away, and the information and the data and our ability to test is changing so rapidly, it’s hard to predict precisely where we’ll be in a week from now, let alone two weeks.”

Whitmer has been under pressure from Republicans and some business leaders to ease the stay-at-home order, under which more than 1 million Michigan residents have filed for unemployment benefits.

On Wednesday, thousands of protesters jammed traffic in front of the Capitol and hundreds milled about on the Capitol lawn, carrying protest signs.

Whitmer said each order weighs heavily on her, but “my job is to protect the people of Michigan.”

Stephanopoulos also asked Whitmer for her reaction to a joint statement from the sheriffs of Leelanau, Benzie, Manistee and Mason counties in northern Michigan saying they would not enforce some aspects of the stay-at-home order, such as a ban on the use of motorboats, because they believe the governor has overreached.

“Four out of 83 sheriffs making a point, that’s fine,” Whitmer said. “I can take it. If it makes people feel better to take their frustrations out on me, that’s fine.”

However, “let’s not get overly political here,” she said. “Let’s focus on the public health.”

Whitmer said she has to think in terms of what is best for the entire state.

The order directs residents to stay at home except for essential purposes such as shopping for food and medicine and getting exercise. It orders all businesses deemed nonessential to stop calling their employees in to work. Whitmer extended and expanded the order on April 9, with new restrictions on retail sales and tightened travel restrictions, including a ban on travel to cottages Up North.

“You’re enthusiastic to get back to work and I am too,” Whitmer said during a Friday tele-town hall with the Detroit Regional Chamber. “But we can’t do it all overnight.”

Whitmer gave the example of her husband, a dentist, who she said is trying to figure out how he can safely get back to work.

“He’s been closed for four to five weeks. He’s got four employees and he’s struggling,” she said.

“And in his line of business, you’re really up close and personal with people. But the Michigan Dental Association is starting to promulgate best practices.”