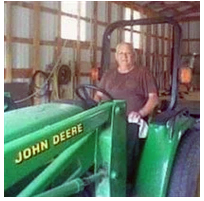 Gerald Littlejohn, 81, of Goetzville, Michigan, died on March 30, 2020, in Sault Ste. Marie, Michigan. He was born on December 11, 1938, in Bridgeport, Michigan, to William Percy and Georgia Belle (Rabidu) Littlejohn.

Gerald grew up in Bridgeport where he worked on a farm. He first met his future wife Eleanor at the A&W and they went to the Saginaw County Fair together on their first date. They married on May 25th, 1963, made their home in Bridgeport, and started a family. Gerald worked at Mitsnmerril making brush chippers until 1976, when he took a job with General Motors in Saginaw and the family moved to Reese. Gerald retired early in 1993 and he and Eleanor moved to Raber Bay.

Gerald liked fishing with Eleanor and going deer hunting. He loved his dog Rosie and his cat “The Fonz”. He was an avid vegetable gardener and he and Eleanor canned tomatoes every year. They also enjoyed traveling to Zapatta, Texas, for the winters.